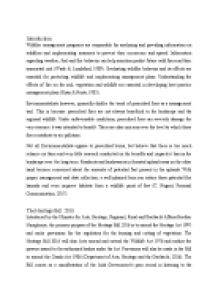 Environmental Mangement - Upland Burning in Ireland and the Effects of the Heritage Bill 2016.

Transfer-Encoding: chunked ﻿Wildlife Biology 2017 Introduction Wildfire management programs are responsible for analyzing and providing information on wildfires and implementing measures to prevent their occurrence and spread. Information regarding weather, fuel and fire behavior can help monitors predict future wild fires and their associated risk (Wade & Lundsford, 1989). Evaluating wildfire behavior and its effects are essential for protecting wildlife and implementing management plans. Understanding the effects of fire on the soil, vegetation and wildlife are essential in developing best practice management plans (Ryan & Noste, 1985). Environmentalists however, generally dislike the trend of prescribed fires as a management tool. This is because prescribed fires are not always beneficial to the landscape and the regional wildlife. Under unfavourable conditions, prescribed fires can severely damage the very resource it was intended to benefit. There are also concerns over the level to which these fires contribute to air pollution. Not all Environmentalists oppose to prescribed burns, but believe that there is too much reliance on them and very little research conducted on the benefits and impacts it has on the landscape over the long-term. Residents and landowners in forested upland areas on the other hand become concerned about the amounts of potential fuel present in the uplands. With proper management and data collection, a well-planned burn can reduce these potential fire hazards and even improve habitats from a wildlife point of few (C. Nugent, Personal Communication, 2017). The Heritage Bill 2016 Introduced by the Minister for Arts, Heritage, Regional, Rural and Gaeltacht Affairs Heather Humphreys, the primary purpose of the Heritage Bill 2016 is to amend the Heritage Act 1995 and make provisions for the regulation for the burning and cutting of vegetation. ...read more.

Yellow status indicates a moderate fire hazard condition, which does not pose any immediate threat to the general population. Those however situated in fire prone landscapes should be aware of the risks posed and take action to remove or reduce hazardous vegetation in close proximity to fuel storage areas and homes. * Condition Orange ? High Fire Risk. Orange status alerts are set in areas of high fire risk conditions generally derive from extended periods of moderate relative humidity, moderate westerly wind and low precipitation. These conditions significantly increase the risk and spread of wildfire. Orange level warnings may also be derive from patterns of human activity that increase the existing fire risk such as upland traditional burning patterns and during holiday periods that may bring high levels of visitors onto lands at risk of wildfire. Orange warning status implies that people situated in affected areas should prepare accordingly for fire outbreaks. During Orange status status, fire suppression personnel should be notified to prepare for the likelihood of a fire occurrence. Fire plans, maps and equipment should be checked and ready for use in the event of a fire. * Condition Red ? Extreme Fire Risk. Red status alerts are set during extreme Fire risk conditions. Red status conditions derive from dry periods with persistent low humidity winds, which in turn dry out vegetation rapidly inducing high levels of fire risk. These conditions combined support wildfire propagation and spread. An ignition of hazardous vegetation in upland areas during Red alert conditions can give rise to rapid and unpredictable fires. Red alert status implies that recipients take immediate action to protect resources and property from fire. ...read more.

Burning in Wet heathlands requires careful planning and consideration, particularly where less mobile species occur. Burning can be highly damaging to birds and reptile populations, and burning should be avoided on heathlands where these are present. Periodic burns generally promote the loss of heath habitat, reduce plant biomass and prevent natural succession. Heather stands over 15 years of age are also less likely to regenerate due to the lowest living bud node being destroyed by the fire. This further diminishes the natural succession (Miller & Miles, 1970) Burning can also result in large areas of exposed bare ground and, depending on the intensity of the fire, the total removal of ground vegetation. The removal of wet heathland vegetation can lead to increased rates of soil erosion although if undertaken in small patches, decolonization from surrounding areas may occur, increasing available habitat types and species diversity (RSBP, 2010) Site-specific treatments of combined grazing and burning can maintain species diversity and community structure if managed correctly. Periodical prescribed burning promotes young regrowth of dead vegetation, which is more nutritious to grazing stocks, and reduces potential fire risks (Fagúndez, 2013). Correctly managed burns in wet heathland habitats with a quick passage and a low temperature, encourages heather seed germination and allows rootstock to regenerate, thus heather can be regarded as a fire adapted species (Nilsen, et al., 2005). The maintenance of Wet heathland low soil nutrients and vegetation succession can be maintained through prescribed burning regimes (Sedláková & Chytrý, 1999). However, the periodical use of burning often creates relatively large patches of even-aged vegetation, which is typical undesirable in regards to wildlife diversity. For instance, a good range in vegetation structure from young regrowth to mature heather stands is favored by Lagopus lagopus scoticus (Red Grouse) (See Fig 12). ...read more.