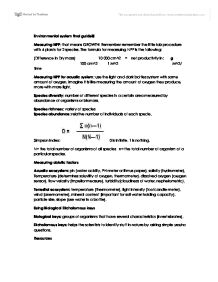 Environmental system final guide!!! Measuring NPP: that means GROWTH! Remember remember the little lab procedure with 4 plants for 2 species. The formula for meassuing NPP is the following: (Difference in Dry mass) 10 000 cm^2 = net productivity in: g 100 cm^2 1 M^2 M^2/ time Measuring NPP for acuatic system: use the light and dark bottles system with same amount of oxygen. Imagine it is like measuring the amount of oxygen they produce, more with more light. Species diversity: number of different species in a certain area measured by abundance of organisms or biomass. Species richness: variety of species Species abundance: relative number of individuals of each specie. Simpson Index: 0 is infinite. 1 is nothing. N= the total number of organisms of all species n= the total number of organism of a particular species. ...read more.

(fish, trees). Non-Renewable: finite amounts. (oil) Replenishable: takes time to restorage, but on a human existence scale. (ground water) Reciclable: can be transformed into usable materials after being used. (aluminium). Sustainable Yield: the highest rate at which a renewable resource can be used indefinitely without reducing its available supply. SY= (Total Biomass or energy at time t+1) - (total biomass or energy at time t) SY= (annual growth and recruitment) - (deaths and emigration) Population Dynamics Remember that the space between the initial phase and the K is the environmental resistance. It is usually the exponential rate. Human developing index, measures the well being of a country (life expectancy, standarts of living, education, and GDP). Economically, countries are divided between MEDC (industrialized, high GDP) and LEDC (low gdp, poverty, resources exported to MEDC, high population growth rates). ...read more.

Five stages: Preindustrial, LEDC, Wealthier LEDC, MEDC stable, MEDC decreasing. Food!!! Undernourished: those who do not obtain enough energy from what they eat. Malnourished: those whose food has enough energy, but lack essential vitamins, proteins, etc. It is important to remember that only 10% of the world land is suitable for growing food, and many people also grow things that cannot be eaten (tobacco, algodon no se como se diga en ingles). There is enough food in the planet to feed everyone, but the food is not distributed equally and there are political and distribution problems with that (how to carry all the food? Who will pay? How would governments control it? There are two types of Farming systems: Subsistence: just for the farmers, their family and their community. Commercial: large profits, usually monocultures, high technology input. Extensive: uses more lands and obtains less inputs and outputs, less animal density. Intensive: intensive use of land, higher inputs and outputs. ...read more.