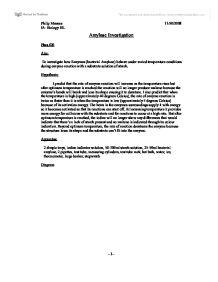 Amylase Investigation Plan (D) Aim: To investigate how Enzymes (bacterial Amylase) behave under varied temperature conditions during enzyme reaction with a substrate solution of starch. Hypothesis: I predict that the rate of enzyme reaction will increase as the temperature rises but after optimum temperature is reached the reaction will no longer produce maltose because the enzyme's bonds will break and lose its shape causing it to denature. I also predict that when the temperature is high (approximately 40 degrees Celsius), the rate of enzyme reaction is twice as faster than it is when the temperature is low (approximately 5 degrees Celsius) because of its activation energy. The heats in the enzymes surroundings supply it with energy so it becomes activated so that its reactions can start off. At increasing temperature it provides more energy for collisions with the substrate and for reactions to occur at a high rate. But after optimum temperature is reached, the iodine will no longer show any differences that would indicate that there's a lack of starch present and no maltose is indicated through its colour indication. Beyond optimum temperature, the rate of reaction denatures the enzyme because the structure loses its shape and the substrate can't fit into the enzyme. ...read more.

The results obtained could be tested for 15 seconds per result and this was slightly ineffective because it had not shown the exact time at which the enzyme had been processing with the active site. A more effective procedure would be if the iodine was directly put into the test tube of starch and amylase solution right after the amylase is put into the test tube. The amount of time taken for the reaction to occur can be measured exactly from reaction when the indicator changes color at the given temperature. Improving the investigation To measure the exact amount of time for the reaction to happen in order get more accurate results, a different method would have been more useful like the one indicated above. However, a color indication comparison paper (just like pH scales) for iodine solution would have been more effective in the process of comparing the color after every 15 seconds for the experiment. If I did the experiment again, I would also have used more than 3 trials even though the error bars from the graphical results obtained were close together from the maximum and minimum values. Philip Mannas 11/30/2008 IA: Biology HL --1-- ...read more.