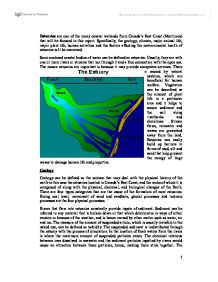 Estuaries are one of the many coastal wetlands from Canadas East Coast (Maritimes) that will be focused in this report. Specifically, the geology, climate, major animal life, major plant life, human activities and the factors affecting the environmenta

Estuaries are one of the many coastal wetlands from Canada's East Coast (Maritimes) that will be focused in this report. Specifically, the geology, climate, major animal life, major plant life, human activities and the factors affecting the environmental health of estuaries will be examined. Semi-enclosed coastal bodies of water can be defined as estuaries. Usually, they are with one or more rivers or streams that run through it and a free connection with the open sea. The reason estuaries are important is because it may provide ecosystem services. There are numerous functions that are caused by natural systems, which are beneficial for human welfare. Vegetation can be described as the amount of plant life in a particular area and it helps to secure sediment and the soil along riverbanks and shorelines. Stream flows, rainwater and waves are prevented away from the land. Estuaries can easily build up barriers in forms of mud, silt and sand that help prevent the energy of large waves to damage human life and properties. Geology Geology can be defined as the science that may deal with the physical history of the earth-in this case the estuaries located in Canada's East Coast, and the rocks of which it is composed of along with the physical, chemical, and biological changes of the Earth. There are four types categories that are the cause of the formation of most estuaries. ...read more.

The only way to decrease the warming would be with the addition of thick clouds involving the reflection of sunlight. Major Animal Life Common animal life includes sea birds, fish, crabs, lobsters, clams, and different types of shellfish, raccoons, opossums, skunks and numerous reptiles. Microorganisms include fungi, bacteria and protozoa of which viruses are not accounted for. Shellfish such as mussels, clams, snails, limpets and Native Oysters exist in the estuaries located in Canada's East Coast. Segmented worms can be defined as those organized of whose bodies are divided into sections. In addition to segmented worms, one may find ribbon worms, flatworms and bristle worms. Ribbon worms are those that have a threadlike or ribbon like forms. Flatworms can be defined as having a soft-body with the lack of body cavity and respiratory organs, which would then restrict them to flattened shapes that would only allow oxygen and small amounts of nutrients to pass through their bodies in order for them to live. Bristle worms are composed of many segments, similar to segmented worms except have bristles along its body in entire length. Shrimp, crabs, copepods and amphipods are various types of crustaceans that may exist in the estuaries located in the Maritimes. Numerous fishes exist of which some are Pacific Salmon, herring, Cutthroat Trout, stickleback and scuplins. Birds such as eagles, Canada Geese, Great Blue Herons, plovers, Black Oystercatchers, killdeers, sandpipers, mergansers, kingfishers, widgeons and mallards all exist in Canadian estuaries in Maritimes. ...read more.

The resulting condition of the impermeable water surface would act as a barrier for the water reaching the soil and would also transport oils from nearby roads into estuaries. It is very common for estuaries to be polluted because of its location between the land and the sea. Bioconcentration and bioaccumulation are processes of how organisms accumulate compounds of pollution and increased concentrations. Factors Affecting the Environmental Health For decades, the features of estuaries attract humans from all over the world. Their semi-enclosed nature between the land and the sea with the included initial high productivity would be the cause. However, the increase in population growth in coastal regions would also mean the increase in pollution due to construction and logging. When inorganic substances and metals that are known as toxicants exert into the estuaries, the Bioconcentration in these materials is passed in the food web resulting in sever impacts in the higher trophic level species. This in turn would cause illness and death to the humans because of the consumption of the organisms. Although it may be an attraction, there are threats such as natural disasters; hurricanes, storm erosion and tsunamis can be of them. Fishing can cause low oxygen conditions in estuaries. For example, the harvesting of oysters could eliminate oyster reefs. The organic matter that would be initially filtered by oysters would fall to the bottom and it originally could be done over several days, and is then consumed by benthic microbes. ...read more.