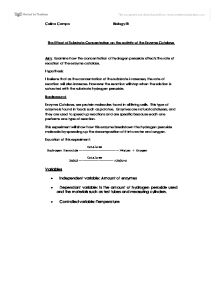 Examine how the concentration of hydrogen peroxide affects the rate of reaction of the enzyme catalase.

The reaction is the fastest compared to the other two sections. Section B, there still reaction between them, however it slowed down. Section C, starts at the 90 seconds. I already mentioned that at this period of time the hydrogen peroxide becomes saturated. By watching the graph, we can say that the rate of reaction takes more time to occur. The independent variable, amount of enzymes, was different to the dependant, which was the amount of hydrogen. This was done so, to see the difference between them at the end of the experiment. These differences, has shown us that the more substrate in the reaction, the more product that will be produce. To reduce errors and obtain more accurate results, we maintained the independent variable always constant. Repetition means, reduce of errors. Therefore we should have repeated the experiment three times approximateley. However, there are some errors which, need to take into account. For example, our reaction in order, to start and stop the stopwatch in the correct time. ?? ?? ?? ?? Celina Campo Biology IB ...read more.