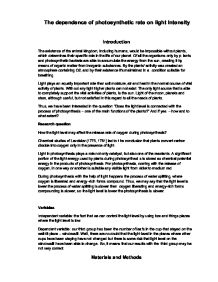 Experiment. The dependence of the rate of photosynthesis on light intensity

The dependence of photosynthetic rate on light intensity Introduction The existence of the animal kingdom, including humans, would be impossible without plants, which determines their specific role in the life of our planet. Of all the organisms only by plants and photosynthetic bacteria are able to accumulate the energy from the sun, creating it by means of organic matter from inorganic substances. By the plants' activity was created an atmosphere containing O2, and by their existence it's maintained in a condition suitable for breathing. Light plays an equally important role than soil moisture, air and heat in the normal course of vital activity of plants. Without any light higher plants cannot exist. The only light source that is able to completely support the vital activities of plants, is the sun. Light of the moon, planets and stars, although useful, but not satisfied in this regard to all the needs of plants. Thus, we have been interested in the question: "Does the light level is connected with the process of photosynthesis - one of the main functions of the plants?" ...read more.

Materials and Methods Materials: puncher, cups, medical syringes with 10 ml cylinder, the leaves of plants Method: We have made a few cuttings of the leaf by using the puncher and infiltrate them with water saturated with CO2. Infiltrated cuttings have been placed in the cups with water enriched CO2. One cup we have placed in the dark box (control group), second cup under the table where light level is low and third one on the windowsill where light level is high. Well, in the end of the experiment the cuttings have had to float but in different cups in different time. So, as a result of accumulation in the intercellular spaces of the oxygen formed during photosynthesis, all the cuttings placed in the third cup that have stayed on the windowsill have had to float but the cuttings placed in the cup that have stayed in the dark box have not had to float at all. Results Well, our results have justified the main theory. ...read more.

First, it's some weaknesses in internal validity that I describe before. The level of sunlight might change not once on this period of time, so it could make a strong influence on our experiment. Probably due this 6th cutting didn't float. Besides, the concentration of soda might be not 0.5% but more or less, so it could made strong influence on the results of the experiment too. Besides, it could change the results in all cups. So, these mistakes jeopardize all of the results of the experiment but anyway I suppose that our experiment have been successful because we have justified the theory. Suggestion for improving investigation As for me, the only things that we can really change is to be much careful with making a soda concentration and probably use the light bulb instead sunlight. First, the concentration of soda plays an important role in this experiment and thus we need to use a special equipment to make right concentration. Then the sunlight is not the best light source for this experiment, as I said before, because it's really fickle, so I would be better to use the light bulb in this experiment. Syromolotov Igor ?? ?? ?? ?? ...read more.