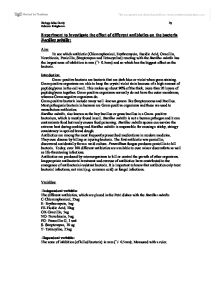 Experiment to investigate the effect of different antibiotics on the bacteria Bacillus subtilis:

Experiment to investigate the effect of different antibiotics on the bacteria Bacillus subtilis: Aim: To see which antibiotic (Chloramphenicol, Erythromycin, Fusidic Acid, Oxacillin, Novobiocin, Penicillin, Streptomyan and Tetracycline) reacting with the Bacillus subtilis has the largest zone of inhibition in mm (+/- 0.5mm) and so which has the biggest effect on the bacteria. Introduction: Gram -positive bacteria are bacteria that are dark blue or violet when gram staining. Gram-positive organisms are able to keep the crystal violet stain because of a high amount of peptidoglycan in the cell wall. This makes up about 90% of the thick, more than 20 layers of peptidoglycan together. Gram-positive organisms normally do not have the outer membrane, whereas Gram-negative organisms do. ...read more.

Antibiotics are produced by microorganisms to kill or control the growth of other organisms. Inappropriate antibacterial treatment and overuse of antibiotics have contributed to the emergence of antibacterial-resistant bacteria. It is important to know that antibiotics only treat bacterial infections, not viral (e.g. common cold) or fungal infections. Variables: -Independent variable: The different antibiotics, which are placed in the Petri dishes with the Bacillus subtilis. C-Chloramphenicol, 25ug E- Erythromycin, 5ug FE-Fluidic Acid, 10ug OX-Oxacillin, 5ug NO- Novobiocin, 5ug, PG- Penecillin G, 1 unit S- Streptomyan, 10 ug T- Tetracyline, 25ug -Dependent variable: The zone of inhibition (of killed bacteria) in mm (+/- 0.5mm). Measured with a ruler. Results: The following is a table to show how large the zone of inhibition for each antibiotic is in mm. ...read more.

Although not complete the foundation for an excellent investigation is present.

The method needs to be provided which would allow the reader to repeat the experiment. The data collection is excellent and answers the aim of the investigation well.

The conclusion does not put enough emphasis on the central question of which antibiotic is most effective and offer a scientific explanation of why this might be.