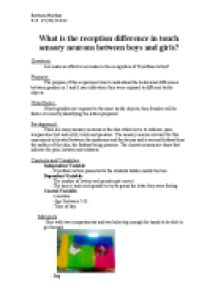 Experiment to test touch sensing in boys and girls

﻿Barbara Marban P. 8 27/03/21012 What is the reception difference in touch sensory neurons between boys and girls? Question: Are males as effective as males in the recognition of Styrofoam letters? Purpose: The purpose of this experiment was to understand the behavioral differences between genders in 5 and 6 year olds when they were exposed to different tactile objects. Hypothesis: If both genders are exposed to the same tactile objects, then females will be faster at correctly identifying the letters proposed. Background: There are many sensory neurons in the skin which serve to indicate, pain, temperature (hot and cold), touch and pressure. The sensory neuron relevant for this experiment is located between the epidermis and the dermis and is second farthest from the surface of the skin, the farthest being pressure. The closest neurons are those that indicate for pain, hotness and coldness. Controls and Variables: Independent Variable: - Styrofoam letters presented to the students hidden inside the box. Dependent Variable: - The number of letters each gender got correct. - The time it took each gender to try to guess the letter they were feeling. ...read more.

Another possible error was how the time was calculated with the stopwatches. There was only one person for two stopwatches, therefore the uncertainty was changed to +/- 1 because taking into consideration the time it takes the child to say the word, your brain to interpret that information and then stop the time a second could easily go by. If both children ended at similar times, it is possible that the stopwatch was stopped at a later time. To improve the lab we should perform a parallel lab in which the only dependent variable is the number of letters correct. Through this we would be able to determine if the time of analysation affected the number of correct guesses and if under pressure, boys or girls were better at identifying the letter. Another change that could be preformed would be to increase the number of students that were experimented upon. This would increase the range of data and its accuracy. The final possible change that could be done would be to have more that one person calculating the time so that the possible human error would decrease from +/-1 to +/- 0.1. ...read more.