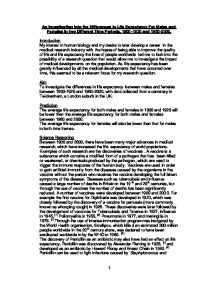 Extended Essay: An Investigation Into the Differences In Life Expectancy For Males and Females In two Different Time Periods, 1900-1920 and 1980-2000.

An Investigation Into the Differences In Life Expectancy For Males and Females In two Different Time Periods, 1900-1920 and 1980-2000. Introduction My interest in human biology and my desire to later develop a career in the medical research industry with the hopes of being able to improve the quality of life and life expectancy the lives of people worldwide led me to look into the possibility of a research question that would allow me to investigate the impact of medical developments on the population. As life expectancy has been greatly influenced by all the medical developments that have occurred over time, this seemed to be a relevant focus for my research question. Aim To investigate the differences in life expectancy between males and females between 1900-1920 and 1980-2000, with data collected from a cemetery in Twickenham, a London suburb in the UK. Prediction The average life expectancy for both males and females in 1900 and 1920 will be lower than the average life expectancy for both males and females between 1980 and 2000. The average life expectancy for females will also be lower than that for males in both time frames. Science Reasoning Between 1900 and 2000, there have been many major advances in medical research, which have increased the life expectancy of world populations. Examples of such research are the discoveries of vaccines. A vaccine is a substance which contains a modified form of a pathogen that has been killed or weakened, or chemicals produced by the pathogen, which are used to trigger the immune response of the human body. Vaccines are used in order to gain artificial immunity from the diseases caused by the organisms in the vaccine without the person who receives the vaccine developing the full blown symptoms of the disease. Diseases such as tuberculosis and influenza caused a large number of deaths in Britain in the 19th and 20th centuries, but through the use of vaccines the number of deaths has been significantly reduced. ...read more.

A vaccination works by releasing antigens into the blood stream which are taken in by macrophages. When the antigens are taken in, they are processed by the macrophage before being presented on a membrane protein. This antigen is then detected by a receptor on a helper T-cell, which binds to the macrophage. The macrophage then passes a signal to the T-cell, causing it to become active. Once the helper T-cell is activated, the antigen binds to a B-cell, which has antibodies in its plasma membrane. These antibodies recognize the antigen, which results in the binding of the antigen and the B-cell. The activated helper T-cell, which has receptors for the same antigen, binds to the B-cell. The T-cell then sends a signal to the inactive B-cell which causes it to become activated. Once activated, the B-cell starts to divide by mitosis to form many identical plasma cells. Plasma cells are active B-cells which contain a very large network of Rough Endoplasmic Reticulum, which synthesis large amounts of antibody, which is secreted by exocytosis in order to destroy the antigens which have infected the body. At the same time that activated helper T-cells are formed, memory cells, which are T-cells and B-cells which persist once the activated cells and antibodies which were produced to fight the disease that triggered the immune response have disappeared. These memory cells allow a rapid immune response the next time the same antigen is detected in the body, resulting in immunity from the disease. This immunity would result in a decrease in deaths from these diseases and therefore an increase in life expectancy for both men and women. Another hugely significant medical discovery which emerged between the two timeframes is the discovery of penicillin and its development as an antibiotic. Sir Alexander Fleming discovered penicillin accidentally in 1929 when he forgot about a sample of staphylococci bacteria he was growing. ...read more.