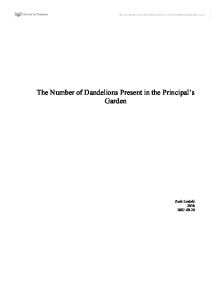 Extrapolation of Abundance of Dandelions in a Named Area

The major uncertainty was caused by human error while counting the dandelions. The participants had a hard time distinguishing dandelions from other plants, or were not able to see them clearly due to other growth around it such as grass, leaves and gravel. As up to 4 participants counted by hand at the same time, there is a strong possibility for some specimens being counted twice. These errors could have cause an invalid result. This could have been avoided by using pre-constructed quadrates which created clear boundaries for the participants to heed to, but would only solve the problem partially. Picking the dandelions as you count them would solve it, but create more problems as it would change the dependant variable. Marking each dandelion with an environmental-friendly marker would also solve part of the problem. While being a viable solution, it makes the exercise very time consuming. In sum, there was a few measuring uncertainties that had small influence on the result that they were discarded and a major uncertainty involving human error while counting the number of dandelions in the Principal's Garden. ...read more.