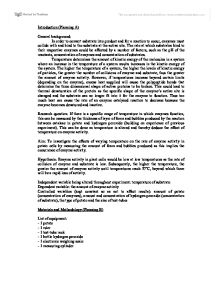 Factors affecting the activity of an enzyme

Introduction (Planning A) General background: In order to convert substrate into product and for a reaction to occur, enzymes must collide with and bind to the substrate at the active site. The rate at which substrates bind to their respective enzymes could be affected by a number of factors, such as the pH of the reactants, concentration of enzymes and concentration of substrates. Temperature determines the amount of kinetic energy of the molecules in a system where an increase in the temperature of a system results increases in the kinetic energy of the system. The higher the temperature of a system, the higher the levels of kinetic energy of particles, the greater the number of collisions of enzyme and substrate, thus the greater the amount of enzyme activity. However, if temperatures increase beyond certain limits (depending on the enzyme), excess heat supplied will cause the polypeptide bonds that determine the three dimensional shape of active proteins to be broken. This could lead to thermal denaturation of the protein as the specific shape of the enzyme's active site is changed and the substrate can no longer fit into it for the enzyme to function. Thus too much heat can cause the rate of an enzyme catalyzed reaction to decrease because the enzyme becomes denatured and inactive. ...read more.