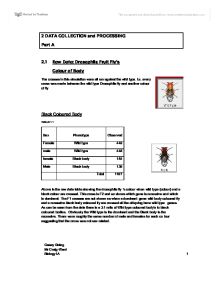 2 DATA COLLECTION and PROCESSING Part A 2.1 Raw Data: Drosophila Fruit Fly's Colour of Body The crosses in this simulation were all run against the wild type. i.e. every cross was made between the wild type Drosophila fly and another colour of fly Black Coloured Body Table 2.1.1 Sex Phenotype Observed Female Wild type 449 male Wild type 446 female Black body 154 Male Black body 138 Total 1187 Above is the raw data table showing the drosophila fly's colour when wild type (colour) and a black colour are crossed. This cross is F2 and so shows which gene is recessive and which is dominant. The F1 crosses are not shown as when a dominant gene wild body coloured fly and a recessive black body coloured fly are crossed all the offspring have wild type genes. As can be seen from the data there is a 3:1 ratio of Wild type coloured body's to black coloured bodies. Obviously the Wild type is the dominant and the Black body is the recessive. There were roughly the same number of male and females for each colour suggesting that the cross was not sex related. Yellow Coloured Body Table 2.1.2 Phenotype Observed Wild type 935 Yellow body 325 Total 1260 The raw data for the yellow coloured body and the wild type coloured body is the same in that it has the same 3:1 ratio for the dominant wild type body to the recessive yellow body. This cross is different however in that after the cross was made there were no yellow females. This could be because of a degenerate disease that only affects females who have double of a particular trait Ebony Coloured Body Table 2.1.3 Sex Phenotype observed Male wild type 461 Female wild type 435 Male ebony body 165 Female ebony body 152 Total 1213 Ebony coloured body and Wild type coloured body are much the same as Black coloured body and the Wild type body. ...read more.

This could be due to a disease affecting the female with the recessive trait. These three colours all have the same 3:1 ratio of wild body colour to their own colour. They all have close "observed" values to the "expected values based on Mendel's law of segregation. The only difference between these three colours other than the obvious colour difference is that Sable body colour has an extremely low Chi squared value. Even though the data is similar this is the only cross out of all five crosses made that has a low than 0.05 chi squared value. The lower chi squared value resulted in a high level of significance with about a 90% chance of this cross happening in real life. Wild type body and Tan body Table 2.2.9 F1 WW WW ww Ww Ww ww Ww Ww F2 W w W WW Ww w Ww ww Table 2.2.10 Phenotype Observed Hypothesis tested Expected (E-O)2/E Level of Significance Wild type 883 3 892.25 0.117 0.4928 Tan Body 308 1 297.75 0.352 Total 1191 4 1191.00 0.470 Chi-squared test statistic: 0.4705 Tan body is also very similar to sable and yellow coloured body. The results from the simulation followed the same pattern as the other. The results were in a 3:1 ratio for wild body colour to Tan body colour, the chi squared value is well over 0.05 and the "observed" value is very close to the "expected" value based on the ratio of 3:1. The level of significance value for the tan body colour and wild type was just below 50% but is close enough to still support the hypothesis tested. In conclusion of part A all the results conformed to the expected ratio of 3:1 outlined in Mendel's law of Segregation. The dominant allele was always the wild type and the recessive was always the different colours. All chi squared values were above 0.05, with the exception of sable body colour, suggesting that the proposed hypothesis was likely to be true. ...read more.

As it was using coins to represent genes it is theoretically possible for all the peas to turn out with the recessive genes, although this is highly unlikely it is still possible due to chance. Reliability The experimental results were fairly reliable as this was a simulation based on real results. All of the level of significance and chi square values supported the hypothesis and suggest that it was more than likely. The reliability of the results associated with part A was a lot higher as part B relied more on probability and chance. Part B's chi squared values were all high resulting in a very low level of significance. A low level of significance suggests that the hypothesis test is not likely to be true but this has an error associated with it as part B was more probability and chance. Limitations/ weaknesses/errors in laboratory investigation The main limitation concerning part A was that it was a simulation, and although the results are based on real life results there could still be a computer error when everything was being calculated. The main limitation concerning part B is that it was using coins and probability and chance. A better way to do this would have been to plant the peas and observe them grow etc. Although this would take much longer it would end in better results and more discussion. Significance of weaknesses on experimental results The main weakness of this experiment would be in part B as part A was based on real results in real life. Part B was based more so on probability and chance then on actually inheritance and genetics. Improving the investigation The investigation could have been improved if instead of coins in part B if Mendel's actual experiment was replicated. This would have ended in better, more reliable results and more discussion. Modifications to experiment There were no modifications to the experimental design as it was a simulation. All instructions were followed as outlined in the cover sheet. ?? ?? ?? ?? Casey Going Mr Craig-Ward Biology IA 1 ...read more.