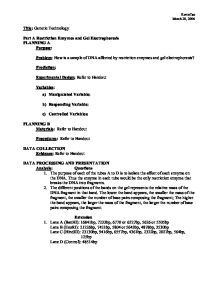 Title: Genetic Technology Part A Restriction Enzymes and Gel Electrophoresis PLANNING A Purpose: Problem: How is a sample of DNA affected by restriction enzymes and gel electrophoresis? Prediction: Experimental Design: Refer to Handout Variables: a) Manipulated Variable: b) Responding Variable: c) Controlled Variables: PLANNING B Materials: Refer to Handout Procedures: Refer to Handout DATA COLLECTION Evidence: Refer to Handout DATA PROCESSING AND PRESENTATION Analysis: Questions 1. The purpose of each of the tubes A to D is to isolate the affect of each enzyme on the DNA. Thus the enzyme in each tube would be the only restriction enzyme that breaks the DNA into fragments. 2. The different positions of the bands on the gel represents the relative mass of the DNA fragment in that band. The lower the band appears, the smaller the mass of the fragment, the smaller the number of base pairs composing the fragment; The higher the band appears, the larger the mass of the fragment, the larger the number of base pairs composing the fragment. ...read more.

This however is very unlikely, a safe enough to say that no two individuals would have exactly the same DNA fingerprints, unless you had a twin. 2. The bands in the child's lane must match with a band in either the father's or mother's lanes because the child receives half of its DNA from its mother and half from the father. Thus some bands will match with the mother and some will match with the father, however, there will never be a band that does not match with neither the mother nor father, unless there is a mutation that occurs. 3. If the evidence DNA sample matched the DNA sample of the victim, I would conclude that the evidence collected came from the victim, and not from the suspect, thus further investigation of the crime scene would be needed in order to find a DNA sample that differed from the victim's DNA 4. ...read more.

Thus, if the father being tested doesn't have the allele, then he can't be the father. However, if he does, it can only prove that he has a chance of being the father. 2. I would not allow DNA fingerprinting to be used as evidence when there is no other evidence supporting that the accused was guilty because DNA fingerprinting only proves that the accused was present at the crime scene at one time or another, it does not prove that they were guilty of the crime CONCLUSION AND EVALUATION Conclusion: Through the findings of this experiment, DNA fingerprinting is enough to be used as evidence in paternity and criminal cases because no two individuals have the same DNA, thus DNA evidence can provide irrefutable evidence of the presence of one certain individual at a crime scene. However, it can only prove their presence, it cannot prove that their guilty. As well, since a child is composed of DNA from both the mother and father, the child's father can be identified by comparing their DNAs. Evaluation: REFERENCE ?? ?? ?? ?? KevinTse March 20, 2006 ...read more.