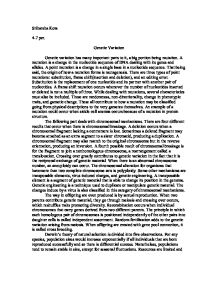 Sriharsha Kota 4-7 per. Genetic Variation Genetic variation has many important parts to it, a big portion being mutation. A mutation is a change in the nucleotide sequence of DNA dealing with its genes and alleles. A point mutation is a change in a single base in a nucleotide sequence. That being said, the origin of how a mutation forms is mutagenesis. There are three types of point mutations: substitution, frame shift(insertion and deletion), and an editing error. Substitution is the replacement of one nucleotide and its partner with another pair of nucleotides. A frame shift mutation occurs whenever the number of nucleotides inserted or deleted is not a multiple of three. While dealing with mutations, several characteristics must also be included. These are randomness, non-directionality, change in phenotypic traits, and gametic change. These all contribute to how a mutation may be classified going from physical descriptions to the very gametes themselves. An example of a mutation could occur when sickle cell anemia occurs because of a mutation in protein structure. The following part deals with chromosomal mechanisms. ...read more.

When two parents contribute genetic material, they go through meiosis and crossing over occurs, which reshuffles traits promoting diversity. Recombination occurs when individual chromosomes that carry genes derived from two different parents. The principle in which each homologous pair of chromosomes is positioned independently of the other pairs into daughter cells is called independent assortment. Random fertilization adds to the genetic variation arising from meiosis. When offspring are created with gene pool connection, it is called cross breeding. Darwin's theory of natural selection is divided into five observations. For any species, population sizes would increase exponentially if all individuals that are born reproduced successfully and so there is differential success. Nonetheless, populations tend to remain stable in size, except for seasonal fluctuations. Resources are limited and production of more individuals than the environment can support leads to struggle for existence. Much of this variation is heritable. When environmental conditions or food sources change, adaptations may occur so that the organism can better live and reproduce. Adaptive radiation is the evolution of many diversely adapted species from a common ancestor upon introduction to various new environmental opportunities and challenges. ...read more.

Another effect if called the bottleneck effect in which a population is reduced such that the surviving population is no longer genetically representative of the original population. It can be concluded that a small population has a much smaller chance of survival than that of a large population. An example of this would be when a species of elephant seals is greatly reduced. When they are rebounded, there is no variation to be found. The last part contributing to gene variation is assortative mating. This is the reproductive pairing of individuals that have more traits in common than would likely be the case if mating were random. Three forms of this are sexual selection, artificial selection, and in-breeding. Sexual selection is when a certain sex of a species selects mates based on certain characteristics. Artificial selection occurs when an outside source chooses certain traits desired to them using inheritable characteristics. The form in which individuals are bred with close relatives is called inbreeding and it leads to reduction in genetic diversity. An example of this could be when watermelons are grown with no seeds to better suit those who eat it, a form of artificial selection. ...read more.