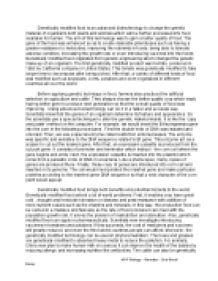 ﻿Genetically modified food is an advanced biotechnology to change the genetic material of organisms both plants and animals which will be further processed into food available for human. The aim of this technology was to gain a better quality of food. The gene of the food was enhanced so as to create desirable phenotypes such as having a greater resistance to herbicides, improving the nutrients in foods, being able to tolerate adverse condition, increasing the growth rate or even introducing vaccines into the foods. Genetically modified food originated from genetic engineering which changed the genetic make-up of an organism. The first genetically modified product was tomato, produced in 1993 by California company in United States. This tomato was genetically modified to take longer time to decompose after being picked. After that, a variety of different kinds of food was modified such as soybeans, corns, potatoes and even vegetables in different countries all over the world. ...read more.

Genetically modified food brings both benefits and potential hazards to the world. Genetically modified food solved a lot of world problems. First, it enables crop have great cold , drought and herbicide toleration or disease and pest resistance with addition of more nutrient values such as the vitamins and minerals. In this way, the production food can be carried in a massive and fast way so the rate of food produced can meet with the population growth rate. It solves the problem of malnutrition and starvation. Also, genetically modified food can apply in pharmaceuticals. Scientists now investigate introducing vaccines in tomatoes and potatoes. If this succeeds, the cost of medicines and vaccines will greatly reduced, and even the third world countries people can afford. Moreover, the genetically modified technology can be used in phytoremediation. The trees and grasses are genetically modified to absorbed heavy metal to reduce the pollution. ...read more.