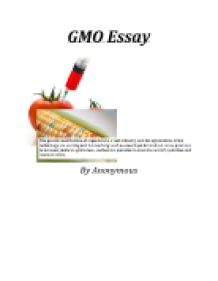 ﻿GMO Essay Macintosh HD:Users:171321:Desktop:gm-foods.jpg Macintosh HD:Users:171321:Desktop:-Uploads-PressReleases-food-Images-20081021-pharmcorn1_1_300.jpg Macintosh HD:Users:171321:Desktop:Screen Shot 2014-11-23 at 3.53.45 pm.png By Anonymous Conventional farmers have taken advantage of the latest agricultural technological and scientific advances, with greater efficiency and higher output, including chemical and synthetic pesticides and fertilizers, mono-cropping, genetic-engineering and modification (in seeds and breeds) and antibiotic and hormones used in livestock.[1] The world?s fish supplies are depleting significantly and 82% of the fish population is endangered and or been over exploited[2]. Scientists are close to a biotechnological breakthrough to produce the first transgenic fish to be consumed by a human. This problem will be addressed at local level first and if succeeding will be addressed at a global level. Currently the world consumes 284,000 metric tonnes of salmon annually[3].. Genetic Modification is the use of modern biotechnological science to alter genes of an organism, altering the DNA that changes the way that a gene rebuilds proteins. Many organisms have been altered to possess desirable traits such as resistance to pesticides and or harsh environments. The world population is growing fast; the population is currently 7.2 billion people and is growing at a rate of 200,000 people a day[4].. With the world population on the rise, comes with the demand of food, scientists are close to scientific breakthrough to develop and engineer a genetically modified fish. Eighty two percent of the world fish stocks are depleting, been over exploited and or endangered, this resulting with the demand of fish protein exploding. ...read more.

Macintosh HD:Users:171321:Desktop:t1larg.salmonnew.jpg There are many critics protesting against the genetically modified foods, as they think that it will affect that species. Whereas scientists are enhancing the organisms growth, resistance to pesticides and benefiting the farmers by increasing their profit and the consumer, as they are getting more for their dollar. These foods enable farmers to make more profit on their produce as the have a larger volume of crops or organisms been processed and then sold. Aqua Bounty is currently listed on the stock market and is slowing rising in price as more people are finding this great solution as they believe that it will be an innovation of tomorrow and think that is worth investing in. Therefore they will educate others on the solution and the interest form people will grow and more money will be invested in the experimental process of this solution. The GM salmon have not yet been released into the wild and as a result scientists don?t know how they will adapt to the environment or how they will evolve through generations. The positive for this solution is that of the engineered salmon feed all year around and as a result grow at twice the rate. Conventional salmon only feed 3 months of the year whereas the GM salmon feeds all year round. The GM salmon take around 18 months to evolve from smolt to adults and non-GM salmon can take up to 4 years to reach full size. ...read more.

Eighty two percent of the world fish stocks are depleting, been over exploited and or endangered, this resulting with the demand of fish protein exploding. The eco system is struggling to keep up with the demand of protein required by the people. Scientists are close to developing and engineering a Genetically Modified salmon, these solutions will somewhat help to combat this fish market problem. This solution will not affect the environment in anyway as the fish will be kept in sanctuaries and will be kept always from the Panamanian waterways to reduce the risk of interaction between local fish species and the genetically modified salmon. Critics are scared that if the salmon are released into the world they will contaminate fish and the generation modifications will alter their appearance and survival techniques. Also the amount of money that ahs been spent on the research and experimental stages of the process have been expensive but in the future the company will make there money back and make profits, also with the stock market shares will also encourage private investors to invest I the company and fund other researches and experiments to further develop the biotechnological field. This solution may take 10 years to implement but will be worth in in the near future as I will combat the fish shortage of the world. Also people will back the company if the GM salmon work and are available to be purchased at food markets. If they were to be consumed they would be the first transgenic organisms to be consumed by a human. ...read more.