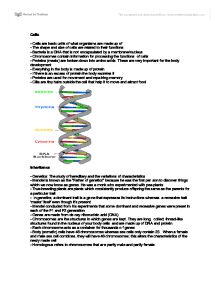 Cells - Cells are basic units of what organisms are made up of - The shape and size of cells are related to their functions - Bacteria is a DNA that is not encapsulated by a membrane/nucleus - Chromosomes contain information for processing the functions of cells - Proteins (meats) are broken down into amino acids. These are very important for the body development - Everything in the body is made up of protein - If there is an excess of protein the body excretes it - Proteins are used for movement and repairing memory - Cilia are tiny hairs outside the cell that help it to move and attract food Inheritance - Genetics: The study of hereditary and the variations of characteristics - Mendel is known as the "Father of genetics" because he was the first person to discover things which we now know as genes. He was a monk who experimented with pea plants - True-breeding plants are plants which consistently produce offspring the same as the parents for a particular trait - In genetics, a dominant trait is a gene that expresses its instructions whereas a recessive trait 'masks' itself even though it's present - Mendel concluded from his experiments that some dominant and recessive genes were preset in each of the F1 and F2 generation - Genes are made from de oxy ribonucleic acid (DNA) ...read more.

- There are 20 different amino acids which combine to form thousands of types of proteins possessing a unique sequence code - A codon is a set of three bases that make up amino acids and further create proteins - Gene expression refers to the appearance in the organism of the characteristic that the gene codes for. Genes contain information about when and where the gene is to act - A mutation is nay spontaneous change in a gene or chromosome that may produce and alteration in the related characteristic - Mutagens are any agents that increase the likelihood of having a mutation such as X-rays, gamma rays and UV radiation - An enzyme is a biological catalyst that increases the rate of a chemical reaction, without being consumed - We know that ALL cells contain exactly the same type and quantity of DNA, but in order for us to differ between different types of cells such as blood, muscle and nerve cells, we need to look at which genes inside that cell is turned on or off. For example a blood cell has a structure of ABC where B= hemoglobin (switched on), the nerve cell also has the structure of ABC where B= hemoglobin (switched off). - Mutations primarily cause more damage than improvements; however, due to results of mutation, there are wide varieties of animals, fruits and human characteristics - Mutations in somatic cells are unimportant because they cannot be inherited whereas ...read more.

These stem cells are special as they can grow into any type of cell given the right condition. The cell can then be put back into the donors' body to give a desirable outcome; also the cells won't be rejected by the body since they carry the same DNA as the donor. Therapeutic cloning can be used to repair injuries by placing new nerve muscles into a damaged spinal cord, growing skin for victims of burns, etc. - Gene cell therapy involves removing the genetic material from some body cells, manipulating it and reinserting it into the person. This can be used to cure diseases such as cancer by removing the cancer-causing mutation. - Human genome refers to the genetic map of the human body's DNA, including chromosomes and genes - Biotechnology is the use of living organisms and the substances produced by them or biological techniques developed through basic research - There are key biotechnologies used in DNA fingerprinting and they include: > Restriction enzymes are protein molecules that can bind to a particular sequence of base pairs in a DNA molecule and then cut the DNA into sections > Then the DNA pieces need to be separated by using a process called electrophoresis which works by separating DNA molecules in an electric field by their differences in size > Thanks to a process called polymerase chain reaction which copies the DNA samples many times, only a small amount of DNA is needed for the fingerprinting process ...read more.