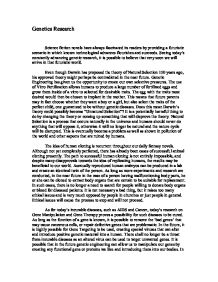 Genetics Research Science fiction novels have always fascinated its readers by providing a futuristic scenario in which known technological advances flourishes and succeeds. Seeing today's constantly advancing genetic research, it is possible to believe that very soon we will arrive in that futuristic world. Even though Darwin has proposed the theory of Natural Selection 150 years ago, his approved theory might perhaps be contradicted in the near future. Genetic Engineering has given us the opportunity to create our own selective pressures. The use of Vitro Fertilization allows humans to produce a large number of fertilized eggs and grow them inside of a vitro to selected for desirable traits. The egg with the traits most desired would then be chosen to implant in the mother. This means that future parents may in fact choose whether they want a boy or a girl, but also select the traits of the perfect child, one guaranteed to be without genetic diseases. ...read more.

In such cases, there is no longer a need to search for people willing to donate body organs or blood for diseased patients. It is not necessary a bad thing, but it raises too many ethical issues and is very much opposed by people in churches or just people in general. Ethical issues will cause the process to stop and will not proceed. As for today's incurable diseases, such as AIDS and Cancer, today's research on Gene Manipulation and Gene Therapy proves a possibility for such diseases to be cured. As long as the function of a gene is known, it is possible to remove the 'bad genes' that may cause cancerous cells, or repair defective genes that are problematic. In the future, it is highly possible for Gene Targeting to be used, creating special viruses that can alter and introduce positive genetic material into a human. There shall no longer be a threat from incurable diseases as an altered virus can be used to target unwanted genes. ...read more.

There are numerous advances in genetic research that brings us to thinking about all the different possibilities our world can change from these discoveries. Although there are still areas where scientists still do not understand, such as the all the functions of our genes, or the proteins, or what each amino acid codes for... but it is not impossible to target the genes that we already know, or to artificially reproduce organisms by obtaining the genetic code. The use and manipulation of genetic material can lead to so many diverse creations that are not necessary just imaginations. These discoveries can change society so incredibly, curing all humans from diseases, or giving humans more control over their own genetic material. Imagine a world where humans could have a say in the composition of their own genetic code... there have already been moves taken towards these futuristic goals, so all there is left to do is to continually support scientists to continue the research and experiments to reach these genetic development. ...read more.