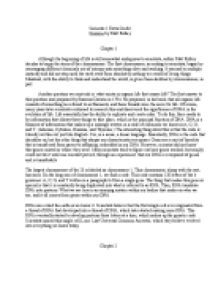 ﻿Semester 1 Extra Credit Genome by Matt Ridley Chapter 1 Although the beginning of life is still somewhat ambiguous to scientists, author Matt Ridley decides to begin the story of the chromosomes. The first chromosome, according to scientists, began by rearranging different chemicals out of entropy into something alive and working. It seemed to multiply instantly and did not stop until the earth went from absolutely nothing to a world of living things. Mankind, with the ability to think and understand the world, is given these abilities by chromosomes, in part. Another question we must ask is: what exists in organic life that causes life? The first answer to this question was proposed by Erasmus Darwin in 1794. He proposed, in his book, that all organic life consists of something he referred to as filaments, and these threads were the secret to life. Of course, many years later scientists continued to research this and discovered the significance of DNA in the evolution of life. Life essentially has the ability to replicate and create order. To do this, there needs to be information that allows these things to take place, which is the principal function of DNA. DNA is a filament of information that makes up a message written in a code of chemicals we know as A, C, G, and T. (Adenine, Cytosine, Guanine, and Thymine.) The interesting thing about this is that the code is literally written out just like English. It is, in a sense, a linear language. Essentially, DNA is the code that identifies us, but the other thing that shapes our characteristics are genes. Genes are a unit of heredity that is transferred from parent to offspring, embedded in our DNA. However, scientist did not know that genes existed or where they were. Many scientists tried to figure out how genes worked, but simply could not do it until one scientist proved, through an experiment, that our DNA is comprised of genes and is transferable. ...read more.

In the mid 1990's, a scientist named Dean Hamer was seeking a gene that caused thrill-seeking personalities, but he knew it wouldn't just be a single gene. The first discovery was found by scientist Richard Ebstein within the D4DR gene. He discovered a sequence of 48 letters that were repeating two to eleven times. Depending on how many times this sequence repeats depends on how effective Dopamine receptors can be. The longer it is, the less responsive; the shorter it is, the more responsive. Based off Ebstein's discovery, Hamer wanted to observe whether people with long D4DR genes have different personalities than those with shorter ones. However, his research didnt lead far because there was not an exact correlation. After further research among different groups of people, Hamer concluded 4% of novelty seekers were in correlation to the D4DR gene and the other 36% of people were considered heritable or influenced by environmental factors. There could be well over 500 possible genes that influence personality. As Ridley moves into the discussion of depression, it is also noted that cholesterol and serotonin levels have a similar effect to the Dopamine protein. People with lower levels have depression or violent actions, but this still does not indicate that genes regulate people. Chapter 12 The miracle of life is a remarkable system in the eyes of a biologist. The idea that an egg can be fertilized to become a completely new being is extraordinary, and as Ridley puts it, "we must leave such a comfortable terrain behind and step into the unknown." From the beginning, Ridley refuses to discuss Divine Intervention, but continues by stating that the plan is contained within the egg through genes. Within Chromosome 12, there is a cluster of development genes that contain the codes necessary to create a brand new living organism. The process begins through fertilization which results in an embryo with a front and back. ...read more.

It would also become a political issue in science in the year 1996. What is this gene and why is it a mystery? Ridley continues. Ridley begins by saying sheep, during the eighteenth century, became a revolutionized form of agriculture because owners were able to selectively breed them for desirable traits; genetics 101. However, sheep that were of the Suffolk breed began to develop irational behavior and soon became ill. They eventually died because of this unknown attack on their system, which would later be called Scrapie. The disease soon spread from the Suffolk breed to around the world. The disease wasn?t inherited but rather infectious, however microbes that were ?supposed? to cause this brain disease was undiscoverable. Time passes and there still is not an answer, however, an American scientist named Bill Hadlow noticed that the damaged brains of the sheep were strikingly similar to cases in Papua New Guinea. In a tribe known as Fore, people were stricken by a brain disease which killed many people, especially women. Through further investigation, it became apparent that the reason why women were mostly affected was because of a funeral ritual where the women would eat the dead. The disease was passed to them, thus the government ruled this ritual out. As Ridley returns to discuss PRP, the qualities discovered are actually interesting to note. In 1982, a scientist named Stanley Prusiner discovered a protein that was found in scrapie-like animals and more importantly resisted digestion by protease enzymes. The gene was PRP which stands for protease resistant protein. The PRP gene is found in mice and humans, but the significant thing about it is that it produces a prion, a protein, that changes its shape to a tough and sticky form. It can not be destroyed and it changes other prions into versions of itself. As the chapter progresses, Ridley talks about the politics behind the scare of the Scrapie disease and the ridiculous methods attempted to prevent it. Many meat products were banned because the disease appeared to come from specific meat products. ...read more.