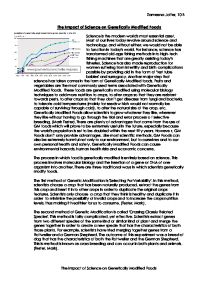 The Impact of Science on Genetically Modified Foods Science is the modern world's most essential asset. Most of our lives today revolve around science and technology, and without either, we would not be able to function in today's world. For instance, science has transformed old-age fishing methods into high-tech fishing machines that are greatly assisting today's fisheries. Science has also made reproduction for women suffering from infertility and birth complications possible by providing aid in the form of 'test tube babies' and surrogacy. Another major step that science has taken comes in the form of Genetically Modified foods. Fruits and vegetables are the most commonly used terms associated with Genetically Modified Foods. These foods are genetically modified using molecular biology techniques to add more nutrition to crops, to alter crops so that they are resistant towards pests, to alter crops so that they don't get diseases from fungi and bacteria, to tolerate cold temperatures (mainly for seeds which would not normally be capable of surviving through cold), to alter the natural size of the crop, etc. Genetically Modified Foods allow scientists to grow whatever they like, wherever they like without having to go through the trial and error process of selective breeding. (Mark Tester). There are plenty of advantages that come from the use of GM foods which will prove to be extremely useful in the future, especially because the world's population is set to be doubled within the next fifty years. However, GM Foods don't only provide advantages. Like most scientific methods, GM Foods can also be extremely harmful not only to our environment, but to ourselves and to our own personal health and safety. ...read more.

(U.S Department of Energy Office of Biological and Environmental Research, 2008). After much ethical evaluation and analysis of biotechnology, skeptics have come to a conclusion that there is a likelihood of biotechnology causing harm, and thus skeptics are encouraging the world to weigh the risks of GM foods against its probable benefits. There is only so much science can do to keep the technology of genetic modification under control and under full surveillance. For instance, a genetically engineered bacteria can be controlled and be placed under supervision in a commercial laboratory, but once the release of this genetically engineered bacteria in to natural environment has occurred, science can no longer control it. Conditions in a laboratory are controllable and appropriate safety measures can be taken and the modified bacteria can be prevented from escaping. The release of genetically engineered species into a non-surveyed environment has risks ranging from fixable to catastrophic, depending on the organisms' genetic nature, genetic modification and the purpose for which it was introduced. Thus, it is extremely risky to conduct crop modification in open plains. Due to the complexity of ecological systems, it is difficult to identify causes of environmental change. Scientists are not able to anticipate specific changes and thus there is a possibility that scientists have failed to detect some scientific observations. Without a richer development of the general science of ecology and specific ecological studies of the environments in which biotechnology is introduced, adequate risk assessments may be impossible. There is also an absence of adequate ecological study before the biotechnological interventions take place, linking to the fact that there is also an absence of commitment to long-term study after the biotechnology has been introduced, thus making ethical evaluation of risks and benefits incomplete. ...read more.

The inserting of animal genes into plants and vice versa also causes complications among a number of religious groups. (U.S Department of Energy Office of Biological and Environmental Research, 2008). Biotechnology has promised the world many benefits through genetically modified foods. Genetically modified foods have definitely delivered their promise in the form improved storage and nutritional quality of food, pest and disease resistance, selective herbicide resistance, tolerance of temperature, saline and water extremes, enhanced animal wellbeing and higher yields and increased quality of yields. Genetically modified foods have the potential to solve world hunger and malnutrition problems, help protect the environment, and reduce reliance upon chemical pesticides and herbicides. Although genetically modified foods promise the world a lot of benefits, scientists still have yet to conduct in depth research and need to assess the potential risks that genetically modified foods can cause. Not until scientists conduct studies and surveys to prove that genetically modified foods are not a threat to human beings health and the worlds ecosystems, will the debate over the release of GM chemicals cease to exist. Despite the fact that GM foods have a number of inviting benefits such as it being a cheaper substitute, it is still debatable that living organisms like plants are complex and thus tampering with such life forms can have unintentional effects. Fortunately, the worlds common interest is being supported by concerned scientists organizations, like Friends of the Earth, who demand mandatory labeling on all food products. It is organizations like these that inspire us to step up and take a stand against genetically modified foods. Just remember: one small step for man, and one giant leap for mankind.(Whitman, 2008). ...read more.