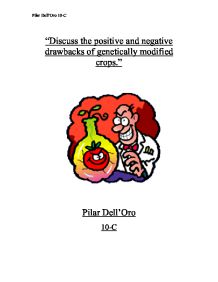 "Discuss the positive and negative drawbacks of genetically modified crops." Pilar Dell'Oro 10-C "Discuss the positive and negative drawbacks of genetically modified crops." GMF- Genetically modified foods is one of the typical examples where signs collide with tradition and with the fear of the unknown. In fact GMF, as it is normally called, is nothing more than the development of seeds that have been manipulated from a genetical perspective to make them either more productive in terms of yield or stronger to deal with diseases or other problems that affect the development of crops in general. This is indeed a dramatic advance provided to us by signs, which will allow more people to be properly fed, and to have a faster eradication of the famines that are still present today. Scientists have been working already for centuries on how to produce stronger and better producing crops. ...read more.

We honestly do not have yet the perfect answer to this question. On one side we know that GMF resolves many of the food problems that affect less economically developed countries, and that it is also making food accessible to a much brother segment of the population at more affordable prices. On the contrary what could be the long term health consequences of eating food produced from GM seeds? There are many theories about these, but nothing has yet been proved in terms of the actual harm, if any, that they could originate. Interesting enough is the perspective of the European Union, or EU, who has been a strong opponent to GMF. On one side is the argument of highly responsible health professionals who state that under the current scientific knowledge it is uncertain if the products originated by GMF, could in fact oppose or not a health threat to the population. ...read more.

The most intriguing part of this debate is that the big promoters of GMF are the United States of America, where they are permitted the production and consumption of these goods. It is reasonable to believe that if the USA allows the production and consumption of these products it is because they are fairly confident that as far as known, there are no significant concerns with the health related issues that are linked to GMF's. More so, some in the USA argue that the EU, strong opponent to GMF, is basically intended to avoid the glut of crops that GMF will generate as well as the weakening position they will face in front of its most traditional food export markets in Africa and Asia. There are fair arguments on both sides of the question and nevertheless it looks like the balance is globally tilting towards the acceptance of GMF as a healthy and efficient approach to make food available to every human on earth. ...read more.