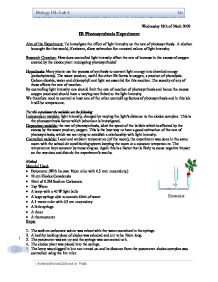 A best-fit equation was formulated and a log relationship was chosen because that is the one that arise in a light intensity against rate of reaction graph. However the equation in this situation only gives us a rough estimation of what the speed will be only on an exact same kind of lab. It can be seen, even with only the calculated values, that after about 100 kJm-2 the rate of increase stabilizes , meaning that it is very near to its optimum value and that another factor than light must be changed for a maximized optimum. In Blackman and Wilson's "Physiological and ecological studies in the analysis of plant environment" they found that "the net assimilation rate during the season of active growth is linearly related to the logarithm of the light intensity". This is why a logarithm best-fit equation was produced, which smoothly fits the graph. In addition, a logarithmic relationship was to be expected as the way the light intensity varied with distance meant that it increased in an exponential way. Conclusion The results of this lab do show a relationship between light intensity and output of excess oxygen theoretically due to photosynthesis in the elodea plant. ...read more.

They have two advantages, firstly is that they are not subject to human raw observation but more importantly use the lux SI light unit, a much more concise way of measuring light intensity(energy per square meter cannot be converted into lumen but provides a good estimation nonetheless). Another issue which might seem trivial but actually has some impact is the orientation of the elodea. As air naturally rises in water there is a high probability that air accumulated at the top of the syringe and did not cause the bubble(hence the measurements) to change and reflect the real rate of reaction. To solve this one would simply have to turn the syringe upside down with the cut end of the leaf upwards (where the gas easily exits). Finally it would be a good idea to test the gas for its content in O2 as this is one of the best indicators for the rate of photosynthesis. This is a bit simpler than it may seem as but using the physical and chemical proprieties of gases one can estimate quite accurately the percentage by adding pyrogallol (absorbs oxygen and therefore changes the volume of a gas) and observing the results. The same is true for testing CO2 presence with potassium hydroxide. Additionally, both of these elements are relatively easy to be obtained. ...read more.