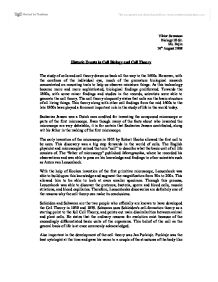 Viktor Svensson Biology IB SL Ms. Bajin 30th August 2008 Historic Events in Cell Biology and Cell Theory The study of cells and cell theory draws us back all the way to the 1600s. However, with the confines of the individual eye, much of the premature biological research concentrated on mounting tools to help us observe miniature things. As this technology became more and more sophisticated, biological findings proliferated. Towards the 1800s, with some minor findings and studies in the records, scientists were able to generate the cell theory. The cell theory eloquently states that cells are the basic structure of all living things. This theory along with other cell findings from the mid 1600s to the late 1800s have played a foremost important role in the study of life in the world today. ...read more.

The English physicist and microscopist coined the term "cell" to describe what the basic unit of all life consists of. The "father of microscopy" published Micrographia, where he recorded his observations and was able to pass on his knowledge and findings to other scientists such as Anton van Leeuenhoek. With the help of Hookes invention of the first primitive microscope, Leeuenhoek was able to build upon this knowledge and augment the magnification from 30x to 200x. This allowed him to be able to look at even smaller specimen. Through this process, Leeuenhoek was able to discover the protozoa, bacteria, sperm and blood cells, muscle striations, and blood capillaries. Therefore, Leeuenhoeks discoveries are definitely one of the reasons why the cell theory can make its conclusions. ...read more.

Also important in the development of the cell theory was Jan Purkinje. Purkinje was the best cytologist at the time and gave his name to a couple of the structures of the body like the Purkinje cells. Purkinje should also deserve credit for the Cell Theory since he concluded that not only animals consisted of cells but also plants. After the Cell Theory was discovered, more information reached the world through Rudolf Virchow. "Omnis Cellula e cellula" is what he said emphasizing that cell division is the importance in generating new cells. This idea is today known as mitosis. In today's world, we constantly use all this knowledge that has been discovered by these "ancient" scientists. The knowledge has allowed us to look in deeper on things and in 1997 it was even possible to clone a sheep. ...read more.