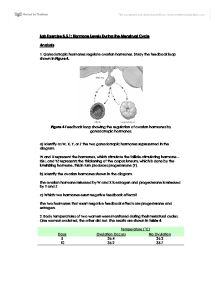 : Hormone Levels During the Menstrual Cycle

g) Compare body temperatures with and without a functioning corpus luteum. The corpus luteum is essential for establishing and maintaining pregnancy and it secretes hormones that are responsible for the thickening of the endometrium. Therefore when the corpus luteum is present the temperature will rise at ovulation and then return back to normal if the egg is not fertilized. Without a corpus luteum the temperature does not rise. 3. Figure 5 shows changes in the thickness of the endometrium throughout the female menstrual cycle. Figure 5 h) Identify the events that occur at times X and Z. The endometrium is thickening at Z because the egg has been released and the body is preparing itself to become pregnant so that if the egg get fertilized the egg can attach itself, and if its not fertilized at point X the endometrium wall will shed and the menstrual period will begin. ...read more.