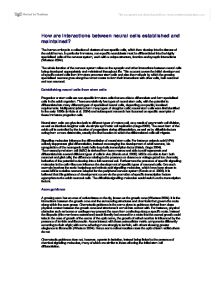 How are interactions between neural cells established and maintained?

How are interactions between neural cells established and maintained? The human embryo is a collection of clusters of non-specific cells, which then develop into the tissues of the adult human. In particular immature, non-specific neuroblasts must be differentiated into the highly specialised cells of the nervous system, each with a unique structure, function and synaptic interactions (Whatson 2004). The whole function of the nervous system relies on the synaptic and other interactions between neural cells being developed appropriately and maintained throughout life. This account covers the initial development of specific neural cells from immature precursor stem cells and also the methods by which the growing specialised neurons grow along the correct routes to form their interactions with other cells, both neuronal and non neuronal. Establishing neural cells from stem cells Progenitor or stem cells are non-specific immature cells that are able to differentiate and form specialised cells in the adult organism. There are relatively few types of neural stem cells, with the potential to differentiate into many different types of specialised neural cells, depending on specific, localised requirements. Multipotent (able to form many types of daughter cells) neural stem cells were first identified in the early 1990s (Imitola et al. 2004) and subsequent research has focussed on specific examples of these immature progenitor cells. Neural stem cells can give rise both to different types of mature cell, as a result of asymmetric cell division, as well as identical daughter cells via simple symmetric cell replication (Gage 2000). ...read more.

Axons interact with these extracellular matrix components differently according to their origin; with some adhering more strongly to laminin, with others showing greater allegiance to fibronectin (Whatson 2004). Hence some retinal neurites cross the optic chiasm whilst others do not. Chemotactic guidance does not, however, operate in isolation, instead being linked to the presence of chemical signalling molecules, many of which are similar to those affecting the initial stem cell differentiation. The idea that the gradient of chemical substances secreted by a target cell might be responsible for the ability of growth cones to find their way to a target cell was initially proposed by Ramon y Cajal more than a century ago (Ming et al. 2002). These chemotropic (literally movement in response to a chemical factor) factors are present in the extracellular matrix and act to either attract or repel the growth cone, along a chemical gradient. One example is netrin-1, which causes isolated xenopus spinal neurones to turn towards the greater concentration. However too high a concentration of netrin-1 (eg 5ng/ml-1 compared to 5 (g/ml-1) appears to desensitise the neurones, which no longer exhibit turning on a gradient (Ming et al. 2002). Netrin-1 (also known as unc-6) is also required by the worm C-elegans in order for differentiating neuroblasts to migrate along the dorsoventral axis; the final direction determined by interactions between the neuroblasts and specific receptors (Hatten 2002). ...read more.

There is logic to this, as a maturing axon would expect to receive specific guidance cues to establish connections with other cells; whereas a mature axon would not seek to continue to migrate towards the cells, rather wishing to maintain accurate connections. As there is a need to replace dead cells throughout life it would not be appropriate to completely switch off signalling molecules such as netrin-1, as every new axon would need to migrate towards the correct connections, but would then benefit from becoming effectively immune to the signalling capabilities of netrin-1 as there would be no need for further migration. Conclusion The importance of accurate migration from the stem cell germinal site to the area of axon-target interaction relates to the need for accurate synaptic connections in the adult nervous system. Organisms with a more simplistic nervous system have a low extent of migration, whilst the vertebrate nervous system involves a high degree of migration (Hatten 2002). Thus the eventual nervous system depends heavily on the accuracy of the guidance provided by both the signalling molecules and the chemotactic scaffold. Whilst there is immense potential in understanding how stem cells develop, in terms of replicating this in order to replace damaged cells in the human adult; thus far the research underlying the regulation of endogenous stem cells is in its infancy and mechanisms are poorly understood. Further, the method by which differentiated cells are able to accurately locate their target connections is also an area of current mystery. ...read more.