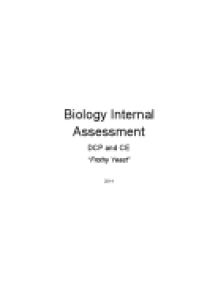 How does changing the percentage of sucrose added to yeast affect the rate of respiration of yeast as measured by the height of gas bubbles (froth) ?

The rate that enzymes and substrates collide is explained by principles of chemical kinetics, a branch of science that is concerned with the dynamics of chemical reactions: the way reactions take place and the rate of the process. ?Collision theory? states that for the rate of reaction to increase there must be more frequent collisions caused by an increase in speed or an increase in number of molecules. In our experiment the concentration of substrate/glucose is being increased and thus the number of molecules of substrate is also increasing. Therefore the frequency of collisions between the enzyme and the substrate will increase causing the reaction to speed up, and thus rate of respiration will increase and more gas will be produced. This explains our initial rise in respiration when we increased the sucrose concentration from 0% to 5%. Therefore at low concentrations, there will be few substrate molecules to collide causing the reaction to progress extremely slowly, this explains our result of 0mm/s at 0% as there was no glucose available for respiration to occur and thus no gas would be produced. However this does not completely explain our results, although at f3irst we saw that increasing concentration increased rate of respiration, which fits with the scientific theory, subsequently rate decreased. This change is explained by the structure of membranes and the Crabtree effect. Sucrose is very polar due to the presence of multiple hydroxyl groups. Therefore sucrose it is only soluble in polar substances such as water. Cellular membranes are made of a phospholipid bilayer, this bilayer is ?permeable, meaning that some molecules are allowed to pass freely (diffuse) through the membrane. The bilayer is virtually impermeable to large molecules, relatively impermeable to small polar molecules and charged ions, and quite permeable to lipid soluble low molecular weight molecules.? [1] Thus sugars are unable to diffuse directly though the membrane into the cell and must utilise membrane protein channels in the membranes that allow facilitated diffusion to occur. ...read more.

I would only use a 10ml measuring cylinder to add the sucrose ensuring constant pressure. Once added I would swirl the test tube 5 times in an anticlockwise direction to further ensure that the sucrose is evenly mixed throughout the solution. Different people were timing and thus their reaction times would be different. This difference in reaction times would not have significantly affected our results as it would have only been a second difference at a maximum and this disparity would have been decreased during the rate calculation. I would use the same person for each trial to ensure that they were consistent. The period of acclimatisation of water in the test tubes was not always long enough so the temperature of the water in the test tube was different to the temperature of the water bath. Due to time pressure the length of time we left our test tubes containing the yeast to acclimatise decreased as the experiment went on. This would have decreased the average rate of respiration as the concentration increased (as we did our experiment in that order) as the temperature in the test tubes would have been lower that what we expected, thus effecting the validity of our results at the higher concentrations to decrease. Leave all of the test tubes for 20minutes in the water bath so they will have time to acclimatise. Prior to the experiment I would measure the temperature of each solution to ensure that it was at 40 degrees. Age of the yeast This would have had an unknown effect as we didn?t conduct any experiments to test this. However most likely it would have decreased the rate of respiration, as more cells may have died and would not be producing carbon dioxide. Thus the rate would have been decreased and the validity of our results would have been decreased. Use fresh yeast for each trial to ensure that the number of alive cells is as similar as possible. ...read more.