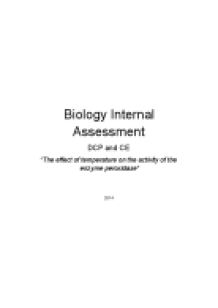 How does changing the temperature of green beans affect the activity of the peroxidase enzyme as measured by the volume of oxygen gas produced in 120 seconds?

For an enzyme substrate to be formed the enzyme and the substrate must collide with the correct orientation and sufficient kinetic energy. This leads on to ?collision theory? which states that for the rate of reaction to increase there must be more frequent collisions caused by an increase in speed or in number of particles, as the temperature is being increased the kinetic energy is also increasing and the speed of the particles will increase. Causing the reaction to speed up, and thus rate of activity will increase and more gas is will be produced, explaining our original increase. However, increasing temperature can have an adverse effect on enzymes as most enzymes consist of a protein and a non-protein (called the cofactor) and the intra- and intermolecular bonds that hold proteins in their structures can be disrupted by changes in temperature. This occurs when the temperature exceeds too far past the optimum temperature. Optimum temperature for enzymes is the temperature where enzyme activity is at its greatest. However ?above this temperature the enzyme structure begins to break down (denature)? (in our results would be approximately the temperature where our maximum rate value of 0.35 occurred, at 30 degrees). If the bonding of the enzyme is affected then the shape of the molecule will be altered and thus the shape of the active site will be alters meaning the substrate will not be able to bind. And thus the rate of enzyme activity as indicated by oxygen gas production, will decrease. The effect of temperature is illustrated in the graph above. Different enzyme have different optimum temperatures, and thus the optimum temperature of humans, 37 degrees, is different to that of green beans which is typically lower due to average climatic conditions that green beans face. ...read more.

While when the flask was not stirred the hydrogen peroxide would have mixed with less peroxidase containing bean cells and thus would not have mixed as successfully with all of the cells causing the rate of activity to not be as high. As we altered this throughout our experiment randomly it would have caused there to be greater variance in my data and thus increased the size of my error bars and decreased the validity of my data. Once I had added the hydrogen peroxide and placed the bung on the flask I would swirl the test tube 5 times in an anticlockwise direction to further ensure that the hydrogen peroxide is evenly mixed with the peroxidase extract. Our method of measuring the amount of gas being produced and thus the rate of enzyme activity is imperfect as some gas may have escaped when placing the bung on the conical flask It is possible that we lost some of the gas during the few seconds prior to placing the bung on the flask, from our results it is assumed that this will be constant, however as the temperature increases so does the particles kinetic energy and thus the amount of gas being lost will increase at the higher temperatures. Causing the mean rate to become progressively lower than it should be as temperature increases. This would have decreased the validity of my results. I would use a Y shaped tubing connector[7], with one end attached to the bung (which would be placed in the conical flask opening), another leading to the gas syringe, and the last connected to the aforementioned fluid dispersing system. This would allow me to add the hydrogen peroxide and begin measuring instantly, not losing any gas. ________________ [1]https://www.dcccd.edu/SiteCollectionDocuments/DCCCD/Docs/Departments/DO/EduAff/Core/Assessment%20Methods/Enzyme_lab%20report_final.pdf [2] http://www.scielo.br/scielo.php?script=sci_arttext&pid=S0103-90162010000200013 [3] http://ijche.com/issues/2010-7-2/42.pdf [4] http://www.plantphysiol.org/content/68/6/1395.full.pdf [5] http://ijche.com/issues/2010-7-2/42.pdf [6] http://www.medical-and-lab-supplies.com/bd-cornwall-disposable-syringe-system-10ml-size.html# [7] https://proscitech.com/?navaction=show_page&chapter=t&page=6#tcv3-03 ...read more.