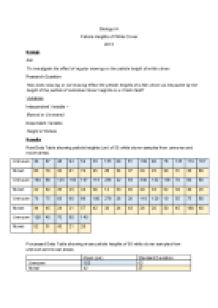 How does mowing or not mowing effect the petiole heights of white clover as measured by the height of the petiole of individual clover heights on a School field?

In the unmown clover it is favourable to have tall petioles as this allows for greater light access and more effective photosynthesis which directly increases the survival rate of the plant, therefore tall clover in the unmown areas is more likely to survive and grow, passing on its genetic material though reproduction, eventually the mown area will become populated with tall clover. Therefore allowing for the petiole height differences seen in my results between the mown and unmown clover samples. However my results are reflected by these other experiments such as the one a found online which directly measured the difference of petiole height in hard-grazed and lax-grazed areas. Their results are shown in the table below. The findings though not as extreme were very similar to my own, as the heavily grazed grass has a shorter petiole than the less heavily grazed grass. Therefore I can conclude that my findings and my explanation is correct as it is confirmed by an outside source. Evaluation: Limitation of the method How significantly could this have impacted on your results and why Improvement The method wasn?t clear from where on the petiole we should measure from, or if we were to include the leaves in this measurement. ...read more.

This would have caused and increase in modes, and our mean to have been effected. We could have measured a bigger area, of 4m, using 30 by 30 quadrats. In the areas we were measuring there were many other grass and plant species. Because there were other grass and plant species there would have been competition for resources, this was more common in the unmown areas as some species can?t survive mowing. Because of this competition some clover plants wouldn?t have as much access to light and water, causing a decrease in growth rate. This would have effected out experiment as we are not sure if we are measuring the effects of decreased water and light access or mowing. Because of this our validity and reliability would have been significantly affected. We would take some clover plant sample which we would then grow until we have many different similar clover plants which we could then plant into two, 4 by 4m area which had no other plants we could then begin to mow one of the areas while consistently weeding to remove any other grass species. Sources 1) http://www.grassland.org.nz/publications/nzgrassland_publication_1214.pdf 2) Competition and Succession in Pastures edited by P. G. Tow, Alec Lazenby ...read more.