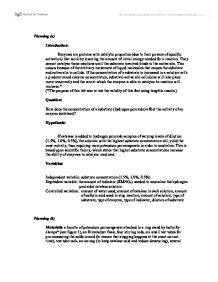 How does the concentration of a substrate affect the activity of an enzyme?

Planning (a) Introduction: Enzymes are proteins with catalytic properties (due to their powers of specific activation) that work by lowering the amount of initial energy needed for a reaction. They cannot catalyze these reactions until the substrate involved binds to the active site. This occurs because of the arbitrary movement of liquid molecules that causes the substrate and active site to collide. If the concentration of a substrate is increased in a solution with a predetermined enzyme concentration, substrate-active site collisions will take place more recurrently and the rate at which the enzyme is able to catalyze its reaction will increase.* (*The purpose of this lab was to test the validity of this fact using tangible results.) Question: How does the concentration of a substrate (hydrogen peroxide) affect the activity of an enzyme (catalase)? Hypothesis: If catalase is added to hydrogen peroxide samples of varying levels of dilution (1.5%, 1.0%, 0.5%), the solution with the highest substrate concentration will yield the most activity, thus requiring more potassium permanganate in order to neutralize. ...read more.

most concentrated hydrogen peroxide solution required the highest amount of indicator to titrate, it has been proven that the hypothesis was correct; increased substrate concentration does in fact yield higher enzyme activity. The above data supports this inference because while catalase mixed with 0.5% hydrogen peroxide only required an average of 1.1 mL of potassium permanganate to neutralize; the 1.5% required an average of 5.3 mL, much higher. Evaluation: While the procedures used were successful in that they proved the hypothesis correct and were for the most part clear and consistent, they were far from perfect. For example, the enzyme used was diluted with distilled water, which could have limited its capability to catalyze. The reactions were not all stopped after exactly three minutes; there could have been a few seconds of inconsistency, which would skew the data. Not enough pipettes were used, therefore contamination could be another issue that would skew the data. Nevertheless, the results produced by experimentation were relatively consistent. Perhaps if it was repeated, more attention could be paid to the issue of contamination, more consistent timing could be observed, and the enzyme tested could remain pure. ...read more.