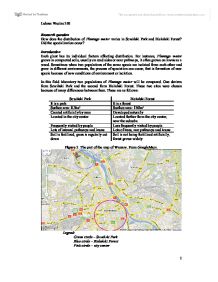 How does the distribution of Plantago maior differ?

Research question How does the distribution of Plantago maior varies in Sowinski Park and Bielanski Forest? Did the specialization occur? Introduction Each plant has its individual factors affecting distribution. For instance, Plantago maior grows in compacted soils, usually on road sides or near pathways, it often grows on lawns as a weed. Sometimes when two populations of the same specie are isolated from each other and grow in different environments, the process of speciation can occur, that is formation of new specie because of new conditions of environment or isolation. In this field laboratory two populations of Plantago maior will be compared. One derives from Sowinski Park and the second from Bielanski Forest. These two sites were chosen because of many differences between them. These are as follows: Sowinski Park Bielanski Forest It is a park It is a forest Surface area: 8.3ha2 Surface area: 130ha2 Created artificially by man Developed naturally Located in the city center Located further from the city center, near the suburbs Frequently visited by people Less frequently visited by people Lots of internal pathways and lawns Lots of trees, rare pathways and lawns Soil is fertilized, grass is regularly cut down Soil is not being feritilized artificially, forest grows widely Figure 1: The part of the map of Warsaw. From GoogleMaps. Legend: Green circle - Sowinski Park Blue circle - Bielanski Forest Pink circle - city center In this laboratory, the square method will be used. In each square the number of plantain, the number of leaves at each plantain will be counted. Moreover, the width of the biggest leaf will be measured. Due to obtain data and calculated value of t-test I will try to judge whether the specification occurred. If yes, possible factors causing this fact will be discussed. Variables Independent: choice of habitats, places on which squares will put. Dependent: number of plantains, number of leaves on plantains, width of the widest leaf on plantains. ...read more.

Evaluation 1. It was not clearly stated what to do with Plantago major which were found on the boundary of used square frames. Next time, it should be said whether to count them or not. 2. In many square frames plantains were so numerous that it was difficult to count them precisely. Next time, all plantains should be counted very carefully. Moreover, a method for counting them could be considered, eg. labeling every already counted plantain by putting on in a small piece of coloured paper (and removing it afterwards!). 3. The measurement of leaves was problematic and thus may cause some errors. In the future, a special pad for supporting the leaves while the measurement could be used. 4. We do not have the sufficient means to judge whether the specification of these two populations occurred. Still, the sole t-test cannot be treated as fully trustworthy. To ameliorate this weakness, other tests and statistical means which would investigate the differences between two populations could be used. Moreover, the long-term observations of Plantago major in Park and Forest would enable us to reach more reliable conclusions. 5. The plantains were investigated in one certain part of a Forest. Therefore, it is hard to judge whether the specialization really occurred. In the future, the sample from all over the Forest should be taken. 6. The calculated percentage data is difficult to compare as not equal number of squares were investigated (to prove this statement the graph will percentage values was plotted - Graph 3; it can be observed that obtained results cannot be compared reliably and easily) . For the next time, the equal amount of squares should be investigated both in the Park and the Forest. This would make the percentage data be more reliable and possible to compare trustworthy. 7. It would be very interesting to measure other factors which can influence the appearance and the density of the plantains, for instance the type of soil or amount of rains in the region of the Park and forest. ...read more.