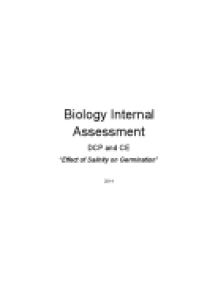 How does the salinity of water affect the germination of mung been seeds as measured by the number of seeds that successfully germinate?

The line of best fit is not accurate and it does not passes through all of the error bars and point. This indicates that the trend indicated by the line is inaccurate and more likely to be less extreme. In otherwords it is more likely that salinity has a more gradual effect on the inhibition of germination than the trend seen in our results. We were able to do a total of 5 repeats for each concentration which meant we were able to ensure greater reliability of our results. However there were still some anomilies which would have caused our error bars to increase. Though there are no single outliers the results for our 0 salinity trial had a large range of results from 4 to 9. Although some level of variation is expected due to seeds being biological in nature, this level of range is unprecidented and indicates that this trial in particular was effected by other factors. The data we collected was insufficient as we only had 8 out of 25 petri dishes have seeds with visible radicles. This led to the inclusion of the data from day four, as the testa cracking is an indicator of the start of germination. This data presented a clearer trend, though still negative it is less extreme, however it also has anomilies, such as recording zero seeds with cracked testas in one trial of the 0 salinity solution, this would have greatly decreased the mean and would have also increased the error bar seen in this graph, as discussed above, this adds to the theory that the 0 salinity results were greatly effected. Another anomily exists in the 0.4 salinity where we recorded 6 seeds with cracked testas, this would have increased the mean therefore it is this result which caused the slight mean increase at 0.4, which does not follow our otherwise negative trend. ...read more.

However seeds with less water may have also been negatively effected as water is also necessary for germination and insufficient water absorbance will result in delayed or lack of germination. Therefore though this would have impacted on the validity of our results as it would have decreased the number of seeds which successfully germinated, decreasing our mean, our results indicate that some dishes (0.3,0.4, 0.5) were more heavily effected by things like this than others. To ensure an even cover of solution on the cotton wool I would utilise a spray bottle[5] containing 5ml of solution, which I would hold 10cm above the centre of the petri dish, and spray my solution to ensure an even cover. The petri dish?s were exposed to differing degrees of light during storage Though light is not a needed factor for germination, light energy does provide heat and therefore imbalances in light exposure may have caused there to be temperature imbalances. As discussed, temperature is important as germination is an enzyme catalysed process and thus the enzymes work fastest at their optimum temperature, with lower temperatures causing the enzymes to work slower. To ensure that the light level was even I would place the seeds in a lidded container so no light will reach the seeds. I would leave the lid slightly agar and place the container in storage. Two of our 0.0 salinity petri dishes grew a substantial amount of mould. All of our seeds also gave off an unpleasant odour after 4 days which continued to the tenth day. The unpleasant smell indicates that our seeds began to rot this is most likely due to excessive water exposure. Therefore our seeds would have had lower germination rates than if we had used less solution. However as we utilised the same amount of solution in all trials, all trials would have been equally effected. However, this may have caused the complete lack of germination in the 0.3, 0.4 and 0.5 trials. ...read more.