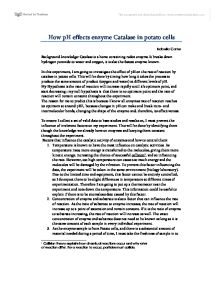 How pH effects enzyme Catalase in potato cells Isabella Carter Background knowledge: Catalase is a heme containing redox enzyme It breaks down hydrogen peroxide to water and oxygen, it is also the fastest enzyme known. In this experiment, I am going to investigate the effect of pH on the rate of reaction by catalase in potato cells. This will be done by timing how long it takes the process to produce the same amount of product (oxygen and water) at different levels of pH. My Hypothesis is the rate of reaction will increase rapidly until it's optimum point, and start decreasing ; my null hypothesis is that there is no optimum point and the rate of reaction will remain constant throughout the experiment. The reason for me to predict this is because I know all enzymes rate of reaction reaches its optimum at around pH7, because changes in pH can make and break intra- and intermolecular bonds, changing the shape of the enzyme and, therefore, its effectiveness. To ensure I collect a set of valid data to base studies and results on, I must prevent the influence of irrelevant factors on my experiment. This will be done by identifying them though the knowledge we already have on enzymes and keeping them constant throughout the experiment. Factors that influence the catalytic activity of enzymes and how to control them: 1. ...read more.

�0.5 pH 18 18.5 18 3 _ _ _ After 10 mins the ink mark had only risen approximately 1cm After 15mins, there is no difference as before 4 204 120 162 5 65 78 81 Potato pieces float up to the surface After a gentle shake, the pieces go down in to the solution 6 40 36 42 7 24 30 28 8 35 30 42 Less fresh potato cells, slightly dried out. 9 48 50 55 As seen in the table, I have not taken any data of the experiment for pH3, this is because it was not possible for the catalase to react and produce enough product for the ink to rise up to 5cm. I had repeated this test for pH3 several times before I reached this decision to not record any data. Toward the end of my experiment, it was almost 3hours from when I cut and prepared the potato discs, and the quality and freshness compared to the potato used on the first few tests, are not exactly the same, but condition of the potato was still usable, so I decided to precede. As for the potato pieces floating to the surface, it was unpredicted but to solve the problem of the pieces becoming partially exposed to the surface, and effect the rate of reaction, I gently shook the test tube, and the pieces floated down immediately. ...read more.

Potentially affecting the last sets of data (pH8, pH9). But its influence is only minimal, and not enough to change my conclusion. The problem with the potatoes discs floating up to the surface I found during the experiment and noted down, it the most likely factor to have caused any impact on the data. I failed to predict the oxygen as a product of catalase would stick to the surface of the potato and cause it to float up and expose out of the solution, I realised immediately that the exposed areas will no carry out catalase activity, which will slow down the time and then the rate will be lower than it should be. At the time of experiment, I was able to temporarily solve this problem by gently shaking the tube, which allowed the air bubbles on the surface of the potato to break free and the potato disc could sink down in to the solution. This method may be affective but not scientific enough to ensure the accuracy of the data collected. A more reliable way to solve this problem is to cut the potato discs thicker, and decrease the surface area to volume ratio, so that the weight of the potato will not be lifted by oxygen bubbles produced on the surface. So instead of 0.2cm thickness, it can be increased to 0.5cm. and instead of 5 discs of potato per tube, only 2-3 will be needed for the same amount of solution as before. ...read more.