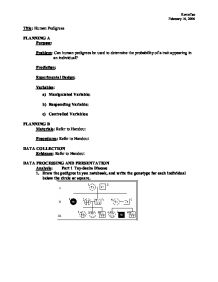 Thus its most probable that my child would come out healthy, and even if it doesn't, the love that my wife and I provide should be able to overcome the disability 4. Many genetic diseases extract a high cost in terms of health care dollars. Since medicare is funded by government funds, should the government be allowed to legislate who may and who may not have children? Defend your position. No, they shouldn't have the power to decide because if the government did, the people carrying a disease or showing a disease would not be allowed to pass on their genes, thus the gene pool of the human race would be reduced, thus there is less variation, and a higher chance of more diseases developing. Eventually, everyone would be infected and the human race would be wiped out. CONCLUSION AND EVALUATION Conclusion: Through the findings of this lab, I discovered that pedigrees can be used to determine the probability of a trait appearing in the next generation and can be used help dictate whether a couple would want to have children or not. Evaluation: ?? ?? ?? ?? KevinTse February 16, 2006 ...read more.