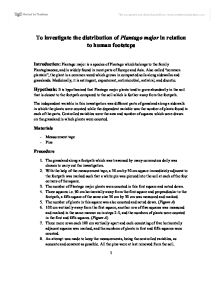 Hypothesis: It is hypothesized that Plantago major plants tend to grow abundantly in the soil that is closest to the footpath compared to the soil which is further away from the footpath.

To investigate the distribution of Plantago major in relation to human footsteps Introduction: Plantago major is a species of Plantago which belongs to the family Plantaginaceae, and is widely found in most parts of Europe and Asia. Also called "common plantain", the plant is a common weed which grows in compacted soils along sidewalks and grasslands. Medicinally, it is astringent, expectorant, antimicrobial, antiviral, and diuretic. Hypothesis: It is hypothesized that Plantago major plants tend to grow abundantly in the soil that is closest to the footpath compared to the soil which is further away from the footpath. The independent variable in this investigation was different parts of grassland along a sidewalk in which the plants were counted while the dependent variable was the number of plants found in each of the parts. ...read more.

6. 100 cm vertically away from the first square, another row of five squares was measured and marked in the same manner as in steps 2-5, and the numbers of plants were counted in the first and fifth squares. (Figure A) 7. Three more rows each 100 cm vertically apart and each consisting of five horizontally adjacent squares was marked, and the numbers of plants in first and fifth squares were counted. 8. An attempt was made to keep the measurements, being the controlled variables, as accurate and constant as possible. All the pins were at last removed from the soil. (Diagram not to scale) Results (a) Data Collection Table 1: Row No. of plants in first square(�0.1) No. of plants in fifth square(�0.1) 1 6 0 2 1 0 3 2 0 4 6 0 5 2 0 (b) ...read more.

X2 = 17 is higher than the critical values at 5%, therefore, the null hypothesis can be rejected; implying that with 95% certainty there exists a difference between the number of plants that grow immediately adjacent to the sidewalk (first square) and the number of plants that grow further away from the sidewalk (fifth square). A diagrammatic illustration in Figure B clearly indicates this difference. Thereby it could be concluded that the growth of Plantago major is most likely related to the human footsteps, and therefore, the result obtained holds true for the hypothesis made prior to the investigation. The reason that there were no plants in the squares away from the sidewalk could be due to the fact that the investigation was carried out in early autumn; implying that most plants begin to wither and disappear. More reliable results could be obtained if the experiment is repeated a number of times and data is obtained from various grasslands. ?? ?? ?? ?? 4 1 ...read more.