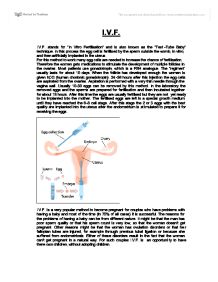 I.V.F. stands for In Vitro Fertilisation and is also known as the Test-Tube Baby technique. In this process the egg cell is fertilised by the sperm outside the womb, in vitro, and then artificially implanted in the uterus.

I.V.F. I.V.F. stands for "In Vitro Fertilisation" and is also known as the "Test-Tube Baby" technique. In this process the egg cell is fertilised by the sperm outside the womb, in vitro, and then artificially implanted in the uterus. For this method to work many egg cells are needed to increase the chance of fertilisation. Therefore the women gets medications to stimulate the development of multiple follicles in the ovaries. Most patients use gonadotropin, which is a FSH analogue. The "regimen" usually lasts for about 10 days. When the follicle has developed enough the women is given hCG (human chorionic gonadotropin). 34-36 hours after this injection the egg cells are aspirated from the ovaries. ...read more.

it is successful. The reasons for the problems of having a baby can be from different nature. It might be that the man has poor sperm quality or that his sperm count is very low, so that the woman doesn't get pregnant. Other reasons might be that the woman has ovulation disorders or that her fallopian tubes are injured, for example through previous tubal ligation or because she suffered from endometriosis. Either of these disorders result in the fact that the woman can't get pregnant in a natural way. For such couples I.V.F. is an opportunity to have there own children, without adopting children. Although I.V.F. ...read more.

Some people also think that I.V.F. is unethical as more embryos are created than needed and as future research might make it possible to select the embryos with the gender the couple wants its child to have, what could create a gender imbalance on the world. This conflict between advantages and disadvantages of I.V.F. raises the question whether there should maybe be restrictions in the application of I.V.F. Probably it is not the best idea to ban it completely because there are without question advantages but maybe not every couple which has problems with having children should have the opportunity to have children through I.V.F. Doctors should distinguish between couples which are in theory able to have children but just didn't try it on the right point of time and those who really can't have children due to infertility or previous disorders. ...read more.