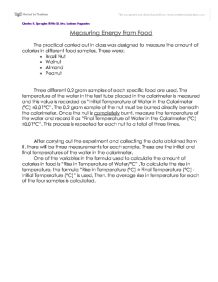 4.2/0.2 6657 J = 1.590 kilocalories 1.590 calories/0.2g --> 8.675 calories/g Peanut: = 10g x 23.7�C x 4.2 = 4977 J = 1.23 calories 1.23 calories/0.2g --> 6.15 calories/g Aspect 3 - Processed Data and Graphs By analyzing the graph above, we can see that the Brazil nut was the food sample that released the most heat energy once it was combusted. This means it is the most caloric food since it has lots of stored chemical energy. The least caloric food was the Peanut. By analyzing the results, it is clear that there is a strong positive correlation between the rise in temperature and the amount of calories in the food. Rise in water temperature is directly proportional to caloric value of food. Conclusion Since all the foods being analyzed were nuts the results were fairly similar, all ranging from 6 to 10 calories per gram. The independent variables of the experiment are the food samples. The dependent variable is the energy released by them (Joules and Calories). Small errors and miscues can result in dramatic variations in results and there are a series of possible sources of error in the experiment, which might have distorted the results, such as: There is a lag time between the time it takes to fully set fire on the nut and the time it takes to place the burning nut beneath the calorimeter. ...read more.

The temperature rise in water also was imprecise due to the lag time between taking out and putting in the thermometer in the test tube, since it should have been precisely timed, and it wasn't. Evaluation: As mentioned previously, the experiment had a series of errors that affected my results when carried out. This was proven in the analysis and can be evaluated with a basis on the procedures carried out. A more precise method with specific explanations would have reduced the percentage error for most results. A simple reminder saying: "The distance between the burning food sample and the calorimeter should be exactly 2 inches" might have lowered the percentage error of the results since the distance from which the calorimeter's water would absorb heat from the food would be the same every trial. The apparatus provided by The British School of Rio de Janeiro was of good quality. The only changes I would suggest to improve the accuracy of the results are: * It would be valid to change the color of the calorimeter to white. Black is a color that absorbs heat, while white reflects it. This would be useful since heat might be going to the walls of the calorimeter instead of being passed to the water in the test tube. * Decrease the size of the opening in the calorimeter so that less heat escapes and more heat is trapped in. ...read more.