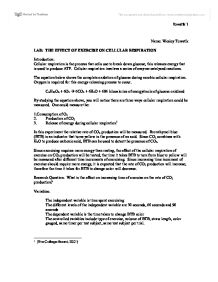 Name: Wesley Towstik LAB: THE EFFECT OF EXERCISE ON CELLULAR RESPIRATION Introduction: Cellular respiration is the process that cells use to break down glucose; this releases energy that is used to produce ATP. Cellular respiration involves a series of enzyme-catalysed reactions. The equation below shows the complete oxidation of glucose during aerobic cellular respiration. Oxygen is required for this energy-releasing process to occur. C6H12O6 + 6O2 --> 6CO2 + 6H2O + 686 kilocalories of energy/mole of glucose oxidized By studying the equation above, you will notice there are three ways cellular respiration could be measured. One could measure the: 1.Consumption of O2 2. Production of CO2 3. Release of energy during cellular respiration1 In this experiment the relative rate of CO2 production will be measured. Bromthymol blue (BTB) is an indicator that turns yellow in the presence of an acid. Since CO2 combines with H2O to produce carbonic acid, BTB can be used to detect the presence of CO2. Since exercising requires more energy than resting, the effect of the cellular respiration of exercise on CO2 production will be tested; the time it takes BTB to turn from blue to yellow will be measured after different time increments of exercising. ...read more.

In order to improve the lab and prevent error while also remaining within time constraints the procedure should be modified with at least two changes. First a formal method for identifying when a color change has actually occurred should be introduced into the lab. This method would first exhibit a quick demonstration of the original color of BTB and then a sample run through of procedure until the BTB changes from a dark blue to a dark green so that everyone can observe what a change in color looks like. While the BTB may become a different color before its change to dark green, throwing off accuracy slightly, precision will be maintained minimizing error. Second, the straw length should be increased to a point where it will be allowed to immerse into the BTB fluid. This would allow whatever CO2 is produced by the user to sufficiently reach the BTB and would allow the rate of color change to be accurately gauged. Furthermore with the modification of straw length a formal method for breathing should be developed so that way the subject does not accidentally inhale BTB. This method would involve simple inhaling via the nose and then exhaling via the mouth. 1 (The College Board, 2001) ?? ?? ?? ?? Towstik 1 ...read more.