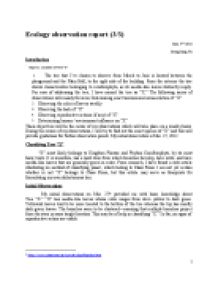 (IB) Ecology Observation Report. The tree that Ive chosen to observe from March to June is located between the playground and the Main Hall

﻿Ecology observation report (3/3) June. 4th 2012 Seung Jong Yu Introduction Figure 1: Location of Tree "X" 1. The tree that I?ve chosen to observe from March to June is located between the playground and the Main Hall, to the right side of the building. From the exterior the tree shows characteristics belonging to coniferophyta, as its needle-like leaves distinctly imply. For ease of addressing the tree, I have named the tree as ?X.? The following series of observations will mainly focus on:Determining exact taxonomical nomenclature of ?X? 2. Observing the color of leaves weekly 3. Observing the bark of ?X? 4. Observing reproductive actions (if any) of ?X? 5. Determining human / environment influence on ?X? These objectives will be the center of my observations which will take place on a weekly basis. During the course of my observations, I will try to find out the exact species of ?X? and this will provide guidelines for further observation points. My initial observation is Mar. 27, 2012. Classifying Tree ?X? ?X? most likely belongs to Kingdom Plantae and Phylum Coniferophyta, by its most basic traits. It is immobile, has a hard stem from which branches develop, have roots, and have needle-like leaves that are generally green in color. ...read more.

This can be a factor of distinction of ?X? that rule out possibilities of species with paired needles.Figure 5: Leaves? Pattern Another discovery during April observations was the indication of ?X?s? preparation for summer. At the end of each branch, there was a budding projection, which could either be a cluster of newly produced leaves or a new branch. Further research and observation is required in order to figure out what this is.The bark of ?X? was also observed. The dark brown, rough surface of the bark showed no visible sign of change; this is normal assuming that trees do not grow out of their barks in a short period of time. Figure 6: Budding from Tree "X" ________________ Season Shift and Relevant Changes Figure 7: Temperature Comparison: May 5th vs. June 2nd Seasonal temperature and daylight change occurred during the course of my third observation period. According to Korea Meteorological Administration, the average temperature of the area (Suwon, which is the nearest local measurement) on May 5th was 17.8 degrees Celsius, whereas the highest and the lowest temperature for the day were 24.9 and 12.7 degrees Celsius respectively. For June 2nd, the average temperature was 22.1 degrees Celsius and the highest and lowest were 28.5 and 17.5 degrees Celsius. ...read more.

A question as to what is the reason for trees? behavior to develop shorter branches at higher positions rose up; through research, two probable answers were achieved: the lower branches were the earlier ones, with more time for growth; the shape maximizes surface for receiving sunlight. A graph could be drawn from the given data, with the length of branch on the x-axis and the height of the branch on the y-axis. I expected the shape of the graph to resemble the silhouette of Tree ?X,? in a simplified form. The graph on the following page is the result of the plotting: Figure 8: Silhouette of Tree "X"? Ending the Observation of Tree ?X? The final conclusion to the three-month observation yet leaves many initial questions unanswered. Not enough research on discovering the exact nomenclature of ?X? was conducted. As a result, I could not find out the exact taxonomical name of Tree ?X.? However, many other traits such as the change in the color of needles (despite the term ?evergreen?) and the mechanism for budding of new branches could be observed and recorded. More questions that could be answered with a more prolonged observation would be: changes in number of leaves during the course of the year, changes in color, changes in the thickness of the stem (growth speed), et cetera. ________________ [1] http://www.pinetum.org/Lovett/classification.htm [2] http://www.britannica.com ...read more.