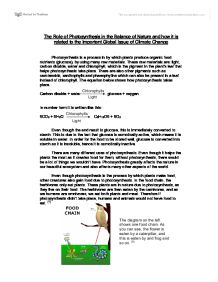 The Role of Photosynthesis in the Balance of Nature and how it is related to the Important Global Issue of Climate Change Photosynthesis is a process in by which plants produce organic food nutrients (glucose), by using many raw materials. These raw materials are: light, carbon dioxide, water and chlorophyll, which is the pigment in the plant's leaf that helps photosynthesis take place. There are also other pigments such as carotenoids, xanthophylls and phaeophytins which can also be present in a leaf instead of chlorophyll. The equation below shows how photosynthesis takes place. Carbon dioxide + water glucose + oxygen In number form it is written like this: 6CO2 + 6H2O C6H12O6 + 6O2 Even though the end result is glucose, this is immediately converted to starch. This is due to the fact that glucose is osmotically active, which means it is soluble in water. In order for the food to be stored well, glucose is converted into starch as it is insoluble, hence it is osmotically inactive. There are many different uses of photosynthesis. Even though it helps the plants the most as it creates food for them, without photosynthesis, there would be a lot of things we wouldn't have. ...read more.

These plants photosynthesise just like other plants and stay alive due to this. If the process of photosynthesis didn't happen, there would be no cotton hence no clothes made from cotton. Many clothes all over the world are made from cotton and most humans wear cotton clothes. Due to photosynthesis, there is cotton and there are cotton clothes which is another important reason why photosynthesis is needed as it affects many factors globally. [1] There are four factors which are needed for photosynthesis to be present as mentioned before. These are: light, water, pigment in the leaf, usually chlorophyll and carbon dioxide. Carbon dioxide is a factor which globally affects the world's climate. Global warming is the most talked about topic in the world right now and it is increasingly affecting the world's climate, making it hotter in some places and colder in others. Not many people are trying to do anything about global warming but there are others who are doing their very best. Plants take in carbon dioxide and global warming is happening due to the excessive amount of carbon dioxide and other gases, but the main being carbon dioxide. Plants are working the hardest to keep global warming at its lowest as they take in the carbon dioxide in the atmosphere because they need it for photosynthesis. ...read more.

This can help the medical world a lot hence it is another very important issue, affected by photosynthesis. [1] Many animals and humans live in houses of dens of their own but in the rainforest or any other ecosystem, animals and people's shelter is the trees and plants. In the Amazon Rainforest, the tall trees in the emergent and the main canopy layer shelter animals and the local habitants, the Amerindians, from the rain. If plants didn't photosynthesise, they wouldn't grow as tall as they do; therefore they wouldn't give animals and humans shelter. Lastly, the waste product of photosynthesis is oxygen. This isn't much of a waste product to humans and animals as they need it to live. Just like plants need carbon dioxide, humans and animals need oxygen to breathe and live. Also, the fact that humans breathe out carbon dioxide, adds to the affect of photosynthesis. They both need each other. Overall, photosynthesis is very important for the world and nature. We all need photosynthesis to occur in order to live and have the things we have now. Photosynthesis also has a global effect as it lowers the affect of global warming, hence our climate doesn't fluctuate too much. In the humans and animals need plants and plants need humans and animals. It is one big cycle. ...read more.