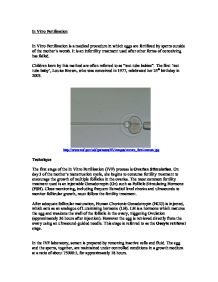 Oocyte is injected during ICSI http://en.wikipedia.org/wiki/Image:Icsi.JPG The embryos that are found to have the highest quality are transferred to the mother's uterus through a catheter. Multiple embryos are placed in the uterus to increase chances of pregnancy. Two weeks after the embryo transfer, the patient will take a pregnancy test to determine whether or not she is pregnant. Progesterone may be injected to thicken the uterus lining. Who needs it? By definition, Infertility is the inability to conceive after 1 year of having sexual intercourse without any form of birth control. This condition affects approximately 6 million people in the United States alone. These technological advances have allowed these couples to become pregnant and raise a child of their own. ...read more.

Another major concern with IVF is multiple pregnancies, which is directly caused by the transfer of multiple embryos to the patient. Ethical issues to consider There are many ethical issues that need to be considered when it comes to IVF. * Many argue that this procedure is unethical as it bypasses the natural process of conception. * Many, particularly religious groups, argue that this method goes against "God's will" and is therefore not ethically right. * Many orphaned kids are in need of a home and IVF stops many potential 'adopters' from providing these orphans with families. * As this process is very expensive, many are uncomfortable with the idea of putting a price on a child. * Many are concerned about the discarding of embryos during IVF. * Many agree that the creation of life in a test tube is unethical and goes beyond attempts of 'playing God' ...read more.