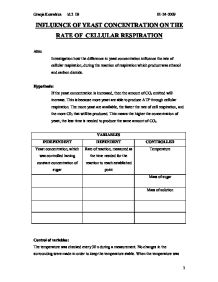 Influence of yeast concentration on rate of cellular respiration

INFLUENCE OF YEAST CONCENTRATION ON THE RATE OF CELLULAR RESPIRATION Aim: Investigation how the difference in yeast concentration influence the rate of cellular respiration, during the reaction of respiration which product was ethanol and carbon dioxide. Hypothesis: If the yeast concentration is increased, then the amount of CO2 emitted will increase. This is because more yeast are able to produce ATP through cellular respiration. The more yeast are available, the faster the rate of cell respiration, and the more C02 that will be produced. This means the higher the concentration of yeast, the less time is needed to produce the same amount of CO2. VARIABLES INDEPENDENT DEPENDENT CONTROLLED Yeast concentration, which was controlled having constant concentration of sugar Rate of reaction, measured as the time needed for the reaction to reach established point Temperature Mass of sugar Mass of solution Control of variables: The temperature was checked every 30 s during a measurement. No changes in the surrounding were made in order to keep the temperature stable. When the temperature was falling, the solution was heated up using burner until the initial temperature (40�C) was reached. The acceptable change in the temperature was � 0.05 �C. ...read more.