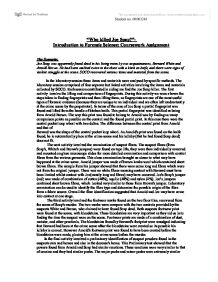 Introduction to Forensic Science: Coursework Assignment. Joe Soap was apparently found dead in his living room by two acquaintances, Bernard White and Arnold Brown. He had been stabbed twice in the chest with a kitchen knife,

"Who killed Joe Soap?"- Introduction to Forensic Science: Coursework Assignment The Scenario: Joe Soap was apparently found dead in his living room by two acquaintances, Bernard White and Arnold Brown. He had been stabbed twice in the chest with a kitchen knife, and there were signs of violent struggle at the scene. SOCO recovered various items and material from the scene. In the laboratory session these items and materials were analysed by specific methods. The laboratory session comprised of four separate but linked activities involving the items and materials collected by SOCO. Each session contributed in aiding me find the Joe Soap killer. The first activity involve the lifting and comparison of fingerprints. During this activity we were shown the steps taken in finding fingerprints and then lifting them, as fingerprints are one of the most useful types of forensic evidence (because they are unique to an individual and are often left inadvertently at the crime scene by the perpetrator). ...read more.

does not fit. The next activity involved the examination of suspect fibres. The suspect fibres (from Soap's, White's and Brown's jumpers) were found on tape lifts, they were then individually removed and mounted on glass microscope slides for more detailed examination and comparison with control fibres from the various garments. This close examination brought us closer to what may have happened at the crime scene. Arnold jumper was made of brown lambs wool which contained short brown fibres. The sample from his jumper showed that there were some long red fibres which were not from the original jumper. There was no white fibres meaning contact with Bernard must have been limited whilst contact with Joe(mostly long red fibres) may have occurred. Joe's Soap's jumper (red) ...read more.

The bloodstains found by Bernard's footprint were smudged indicating that Bernard had been at the crime scene after the bloodstains were created so its possible his lullaby is correct. However Arnold's footwear print was found to have been created before the bloodstains were made, placing him at the crime scene before the murder. In the final activity involved a preliminary identification of suspect powders found in the suspects cars and homes and also in the decease's home. This Preliminary test showed that the powers found from Arnold and Soap had similar reactions. These reactions were very similar to that of cocaine and they had similar peeks. The major peeks and minor peeks were extremely similar showing that the substance may have been linked and from the same source. Looking back at the practicals I can say that the activities have pointed in Arnold Brown direction placing him at the scene of the murder when he denies it. Student no. 08003248 ...read more.