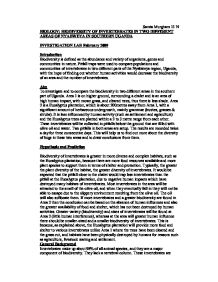 Samia Murgham 11 N BIOLOGY: BIODIVERSITY OF INVERTEBRATES IN TWO DIFFERENT AREAS OF NYABWEYA IN SOUTHERN UGANDA INVESTIGATION LAB February 2009 Introduction Biodiversity is defined as the abundance and variety of organisms, genes and communities in nature. Pitfall traps were used to compare populations and communities of invertebrates in two different parts of the Nyabweya region, Uganda, with the hope of finding out whether human activities would decrease the biodiversity of an area and the number of invertebrates. Aim To investigate and to compare the biodiversity in two different areas in the southern part of Uganda. Area 1 is on higher ground, surrounding a chalet and is an area of high human impact, with mown grass, and cleared trees, thus there is less shade. Area 2 is a Eucalyptus plantation, which is about 200metres away from Area 1, with a significant amount of herbaceous undergrowth, mainly graminae (bushes, grasses & shrubs). It is less influenced by human activity (such as settlement and agriculture) and the Eucalyptus trees are planted within a 2 to 3 metre range from each other. These invertebrates will be collected in pitfalls below the ground that are filled with olive oil and water. Two pitfalls in both areas are setup. The results are recorded twice a day for three consecutive days. This will help us to find out more about the diversity of bugs in these two areas and to draw conclusions from them. Hypothesis and Prediction Biodiversity of invertebrates is greater in more diverse and complex habitats, such as the Eucalyptus plantation, because there are more food resources available and more plant species to support them in terms of shelter and protection. Typically, the greater the plant diversity of the habitat, the greater diversity of invertebrates. It would be expected that the pitfall close to the chalet would trap less invertebrates than the pitfall at the Eucalyptus plantation, due to negative human impacts which have destroyed many habitats of invertebrates. ...read more.

Considering the small volume of the plastic cup, a significant amount and variety of invertebrates were trapped, which was enough to calculate a relatively accurate and representative biodiversity index for both areas. Perhaps a greater sample of invertebrates could have been collected, by use of a larger cup or tin. Main Weaknesses in the Method This was concerning the ethical issues involved in the investigation: * Every species has the RIGHT TO LIFE whether useful to the human race or not. * Each area's wild-life is of cultural importance to the local human population and it is WRONG to destroy it (even though some locals might be destroying it themselves). Therefore this experiment was not entirely ethical as some bugs were killed in the process. * The method of using pitfalls to investigate biodiversity is not entirely representative of the whole community, and it could be solely based on chance. * Some invertebrates are inactive and do not move around much, and so the pitfalls only trap those species that move around a lot such as the ants. Suggested Improvements that can be Investigated * A greater number of pitfalls could have been setup in each area to generate a more accurate result. * A grid pattern when laying pitfalls could be used, after having selected the location randomly, so that a greater depth of knowledge and understanding could be achieved in terms of different species found in relation to the other species found in surrounding pitfalls as well as the location in relation to the distances of the pitfall locations from edges of plantations and buildings. This would also be important in determining. * An alternative method for collecting invertebrates without having to kill them should be considered due to the ethical reasons mentioned previously. New Questions that Could be Posed * Further investigations could be done to determine whether the plant species richness affects the number of invertebrates found in an area. * If some human activities could be promoting biodiversity, such as the existence of artificially fertilized areas. ...read more.