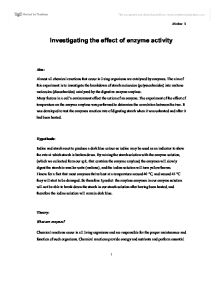 Investigating the effect of enzyme activity

Investigating the effect of enzyme activity Aim: Almost all chemical reactions that occur in living organisms are catalyzed by enzymes. The aim of this experiment is to investigate the breakdown of starch molecules (polysaccharides) into maltose molecules (disaccharides) catalyzed by the digestive enzyme amylase. Many factors in a cell's environment effect the action of an enzyme. The experiment of the effect of temperature on the enzyme amylase was performed to determine the correlation between the two. It was developed to test the enzymes reaction rate of digesting starch when it was unheated and after it had been heated. Hypothesis: Iodine and starch react to produce a dark blue colour so iodine may be used as an indicator to show the rate at which starch is broken down. By mixing the starch solution with the enzyme solution, (which we collected from our spit, that contains the enzyme amylase) the enzymes will slowly digest the starch to smaller units (maltose), and the iodine solution will turn yellow/brown. I know for a fact that most enzymes thrive best at a temperature around 40 �C, and around 45 �C they will start to be damaged. So therefore I predict: the amylase enzymes in our enzyme solution will not be able to break down the starch in our starch solution after having been heated, and therefore the iodine solution will remain dark blue. ...read more.

like for example amylase. After being chewed and swallowed, the food enters the esophagus on its way to the stomach. After being in the stomach, food enters the small intestine. In the small intestine, bile (produced in the liver and stored in the gall bladder), pancreatic enzymes, and other digestive enzymes produced by the inner wall of the small intestine help in the breakdown of food. Rate of enzyme activity Enzyme activity is affected by several factors such as temperature, pH, the concentration of the substrate or of the enzyme, and sometimes even stress. However, the factor which we are testing in this experiment is temperature. Enzyme activity is changed by variation in temperature. As temperature rises the rate of chemical reactions increases because temperature increases the rate of motion of molecules. This leads to more interactions between an enzyme and its substrate. In this experiment the substrate was starch, which is a polysaccharide of glucose. However, if the temperature is too high, enzymes can be denatured and they can no longer bind to a substrate and catalyze reactions. In other words: the enzyme activity will increase as the temperature rises, until a certain high temperature at which the enzyme will denature and be non-functional. ...read more.

6. Afterwards we mixed 1 ml of the enzyme solution with 5 ml of the starch solution, and added a drop of the mixture into a hollow in the porcelain plate. Immediately we added a drop of the iodine solution. We made a sample every 20 second until the samples turned yellow/brown and noted the time. 7. Then we repeated everything from the step number 6, but instead of using the unheated enzyme solution we used the heated. Results: Discussion: Looking at the data collected, it appears as though the hypothesis which was developed at the beginning of the experiment was in fact correct. The amylase from our spit did breakdown the starch in the starch solution, and after 80 seconds the colour of the iodine solution went from being dark blue to yellow/brown. And as mentioned in the hypothesis the colour of the iodine solution stayed dark blue after the enzyme solution had been heated. Conclusion: In conclusion this experiment further confirmed that enzymes are damaged at a temperature above 60 �C. Each enzyme has its own individual prime functional temperature, therefore if they are removed from these environments they will not function as well or possibly denature if it the temperature is too high. Although, if an enzyme's optimal temperature is maintained then the enzymes will catalyze reactions at optimum rates. ?? ?? ?? ?? Malaz 1i 1 ...read more.