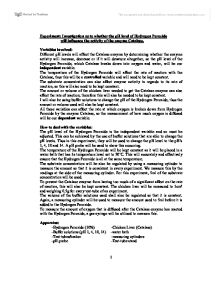 Another weakness could be that my decision to only record 5 minutes of the rate of reaction once the Catalase has been added to the Hydrogen Peroxide solutions could have hindered any further possible chances of oxygen given off being recorded. Also, the Catalase enzyme that was used had been taken from chicken liver. For the first two sets of my experiments, the Catalase was taken from the same chicken liver, however, for my third set of experiment the chicken liver was changed to a fresh new chicken and this could have affected my results and could be taken into consideration as an error. There were also limitations to the experiment. I did my experiment with several other people who were doing theirs, and between us there were only 4 measuring cylinders to be shared and so this slowed down my experimentation process for having to wait in turn to use the equipment. We also had to share a limited amount of the chicken liver and the Hydrogen Peroxide solutions. Also, there were only two electronic water baths that catered to many people that wanted many different temperatures for the water bath. Thus, this limited my options in using the electronic water bath and made me use a Bunsen burner and beaker for a water bath in my third set of experiment. To improve this experiment, I could have also done one where I looked at the other factors that affected the enzyme activity of Catalase, like temperature or substrate concentration for example if I had more time. Then I could have compared the results between the factors, and see the similarities and differences. The levels of pH that I used could have also been improved, in that I could do another experiment of a similar kind but focus on closer pH levels to the optimum pH level, so that I get a more accurate account of the enzyme activity . ?? ?? ?? ?? 1 ...read more.