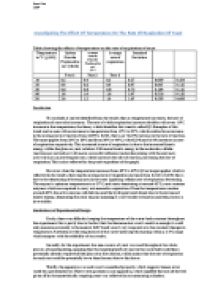 Investigating The Effect Of Temperature On The Respiration Of Yeast

Furthermore the temperature of the water-bath kept fluctuating within a 2-3°C range which tampers with the reliability of our results. Secondly, for the experiment, the same source of yeast was used throughout the whole process of experimenting, meaning that the respiring batch of yeast in the water bath could have potentially already respired all the glucose in the solution, which means that the rate of respiration for each test could be potentially lower than the next due to this factor. Thirdly, the apparatus we used wasn’t assembled properly, which suggests human error could be a potential factor. There were gas leaks in our apparatus, which signified that not all the C02 given off by the anaerobically respiring yeast was collected in our measuring cylinders. A significant anomalous is identified as the 50°C test 1, with a significant reading of 2.4cm3 of C02 given off, the culmination of the above errors could have contributed to this and also the slight difference of inconsistent readings littered throughout our results table. ...read more.

The apparatus in the experiment is very important; gas leaks caused by old rubber tubing would affect the results we obtain massively, because the volume of C02 produced is what we are measuring. It is possible to suggest that we re-new our equipment, which prevents the possibility of apparatus failure or the ineffectiveness of the apparatus. All of which contributes to the consistency of the data we collect. If these 3 major issues are addressed, it will significantly reduce the probability or the potential for error to occur, our results will therefore be more reliable and accurate and maybe the theory of Q2 will become more prominent. Because of the potential gas leak problems and fluctuating temperatures, we were unable to achieve a clear demonstration of the Q2 theory. When temperature increases, rate of reaction should double, but our results reveal that it ‘almost doubles’. And I think that if the issues mentioned earlier are addressed, then the rate of reaction increasing per 10°C will no longer be 75.67% or 65.3% but 100% + 1%. ...read more.