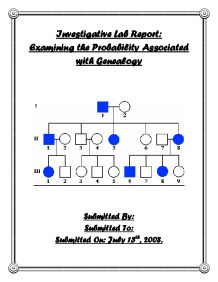 Investigating the Probability Associated with Genealogy

Investigative Lab Report: Examining the Probability Associated with Genealogy Submitted By: Submitted To: Submitted On: July 13th, 2008. Investigating the Probability Associated with Genealogy Focus Question: The objective of this lab is to determine the probability involved in copulation. This will be investigated through the hypothetical situation of flipping a coin in order to determine the alleles, and thus the genotype, of the various attributes of the hypothetical parents. According to the resultant genomes of the parents (in regards to if the genes for each attribute are deemed heterozygous or homozygous), the theoretical genome of two offspring will be developed using the probability of flipping a coin. Based upon the genotype of each individual, the phenotype will be illustrated. The following traits will considered: gender; facial shape; prominence of chin; attachment or detachment of ear lobes; cleft chin; hair curl; presence of a 'Widow's peak'; hair colour; eyebrow thickness; eyebrow separation; eyebrow colour; eye distance; eye size; eye shape; eye slant; eye colour; eyelash length; mouth length; lip thickness; presence of Hapsburg lip; presence of dimples; nose size; presence of freckles; blood type; colour blindness (of seeing red or green); Cystic fibrosis; and Achondroplasia. Using this information, the genes of future generations will be predicted. Thus, the influence of probability over heterozygous and homozygous genes and recessive and dominant traits and the resultant phenotype will be explicated. Hypothesis: It is predicted that the genotypes of the two hypothetical parents will differ greatly as they express contrast phenotypes. ...read more.

; eyelash length (long or short); mouth length (long, average, or short); lip thickness (thick or thin); presence of Hapsburg lip (distinctly protruding, slightly protruding, or absent); dimples (present or absent); nose size (large, average, or small); freckles (present or absent); blood type(A, AB, B, or O); colour blindness of seeing red or green (affected, carrier, or not affected); Cystic fibrosis(affected, carrier, or not affected); and Achondroplasia(affected, carrier, or not affected). Record your observations in the data table. ii) Using the Human traits information handout, translate these phenotypes into genotypes and enter them into the data table. iii) For traits which possess more than one gene in order to be expressed, each parent must flip their coin. A head will denote a dominant allele and a tail denotes a recessive allele. For example, if the father has a cleft chin, the gene that causes this could be CC or Cc. Therefore, the father shall flip his coin. If the result is a head, his gene is CC. If the result is a tail, his gene is Cc. Part 2: Determining the Genotypes of the Offspring iv) In each of the child's genes, the mother will contribute one allele and the father will donate another allele. For each of the traits where a parent (or both) are homozygous, it is not necessary to flip a coin to determine the allele that will be donated, the two alleles are the same. v) If the parent is heterozygous for a trait, each partner will flip their coin. ...read more.

Contrastly, when the parents are both heterozygous, there is a 50% chance of the offspring having a heterozygous gene, a 25% prospect of the child possessing two recessive alleles and a 25% probability of the child possessing two dominant alleles. Thus, the simple mathematics of probability are reflected in this simulation. These probabilities, however, neglect to consider the possibility of error and mutations in the processes of mitosis and meiosis which may alter the genes. Thus, there is an indeterminate degree of error in the percent probabilities. As illustrated in Image I, it evident that pedigrees can be utilized in order to determine the risk involved in inheriting diseases or merely the prospect of inheriting certain attributes, such as eyelash length. As predicted, the genotypes of the two hypothetical parents differ greatly as the individuals did express contrast phenotypes. Moreover, due to the evident phenotypic variation between the two selected hypothetical parents, it was postulated that the offspring would possess intermediary genomes due to the simple mathematics of probability, and thus, would express contrast phenotypes. This prediction is supported by Images V and VI and Table I which portray the great phenotypic and genotypic variations of Child I and Child II. Additionally, the polygenic attributes were predicted to vary more. This prediction was evidently correct by considering that both children had brown hair, despite that neither parent had this colour of hair. Conclusively, it is evident that probability is fundamental in the process of copulation. ?? ?? ?? ?? ...read more.