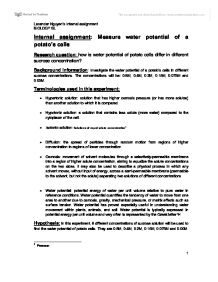 This would affect badly on the result of the whole because the water potential of different potatoes' cells is different. Two, the second error is that while putting the potato cubes on the table for a long time without any cover, the water in potato cells evaporated, which might change the water potential of it. Three, while blotting the cubes, I might have blotted them so strongly, this made the water in cells come out, which also lead to the inaccurate. Four, because the amount of potato cubes was big, and we don't have enough time so that we only estimated the size the cubes. The size might not be exact 2mm3 LIMITATION AND SUGGESTIONS Limitations Suggestions Potato cubes stick together, hence the surface of potato cubes in sucrose solution might decrease Shake the tubes contain potato cubes gently and frequently in order to make the cubes separate. Water in potato cells will be lost because of evaporation Put the potato cubes in a box with lid or Petri dish with wrap after cutting. Using different potatoes Use one potato only. If the surround of the potato is dry and turn dark brown, cut it off and use the inner parts. The sensitiveness of digital balance can cause to an imprecise in measuring the potato cubes' masses because just a touch can change the result of a measure. ...read more.