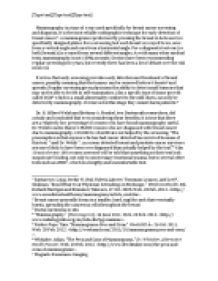 Is there such thing as too much mammography?

﻿[Type text][Type text][Type text] Mammography is a type of x-ray used specifically for breast cancer screening and diagnosis. It is the most reliable radiographic technique for early detection of breast cancer[1]. A mammogram is preformed by pressing the breast in between two specifically designed plates. For a screening test each breast is x-rayed twice, once from a vertical angle and once from a horizontal angle. For a diagnostic test one (or both) breast(s) is x-rayed from several different angles. As with many other medical tests, mammography is not 100% accurate. Doctors have been recommending regular screenings for years, but recently there has been a lot of debate over the risk involved. It is true that early screening provides early detection and treatment of breast cancer, possibly meaning that the tumour can be removed before it bursts[2] and spreads. Regular screening gives physicians the ability to detect small tumours that may not be able to be felt in self-examination. Also a specific type of tissue growth called DCIS[3] which is a small abnormality confined to the milk ducts, can only be detected by mammography. ...read more.

The USPSTF[8] issued a guideline in November 2009 that suggested that women ages 40-49 should discuss the risks and benefits of mammography with their doctor and they should be given individualized mammographic recommendations, taking into consideration things like family history. Then at the age of 50, they should start to have mammograms every 2 years until the age of 74; henceforth reducing the amount of mammograms she will receive in her life by 22.[9] Dr. Andrea Bradd is a British doctor presently living in Barbados, she worked in radiology and subsequently; mammography. When asked about the debate centring whether mammography is worth the cost and risks she said that she was in support of mammography being used, but in moderation. She acknowledged that, statistically, there is only a small amount of people who have been benefitted by the treatment but, as the equipment is getting better all the time and she believes that they?ve finally reached the point where they have the right age range for screening, she believes that the results can become much more accurate. ...read more.