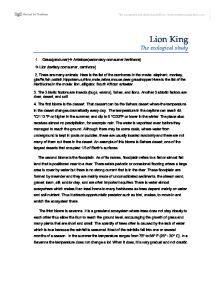 Lion King The ecological study 1. .Grass(producer)--> Antelope(secondary comsumer,herbivore) --> Lion (tertiary comsumer, carnivore) 2. There are many animals. Here is the list of the carnivores in the movie: elephant, monkey, giraffe,fish,ostrich,hippotamus,rhino,mole,zebra,mouse,deer,grasshopper.Here is the list of the Herbivores in the movie: lion, alligator, South African anteater. 3. The 3 biotic factors are insects (bugs, worms), fishes, and lions. Another 3 abiotic factors are river, desert, and soil 4. The first biome is the dessert. That dessert can be the Sahara desert where the temperature in the desert changes dramatically every day. The temperature in the daytime can reach 45 �C/113 �F or higher in the summer, and dip to 0 �C/32�F or lower in the winter. The place also receives almost no precipitation, for example: rain. The water is vaporized even before they managed to reach the ground. Although there may be some oasis, where water from underground is kept in pools or puddles, these are usually located randomly and there are not many of them out there in the desert. An example of this biome is Sahara desert, one of the largest deserts that occupied 1/3 of Earth's surfaces The second biome is the floodplain. As of its names, floodplain refers to a flat or almost flat land that is positioned near to a river. There exists periodic or occasional flooding where a large area is cover by water but there is no strong current that is in the river. ...read more.

After that, the detritivores enter the dead body tissues and start to settle down their eggs inside the skin of the dead bodies and the mothers of the eggs die on a dead body. Once the eggs hatched, the hatchling will start to feed on the dead organs, tissues, the parts that are digestible or biologically degradable. That is how a certain organism plays a big role in recycling 8. a) There are several scenes where the hyenas show their behavior of scavenging such as the scenes of the elephant graveyard where the hyenas feed on the dead elephant and leave all the elephant bone in one place. Afterward, it piles up into big mountains and hills of bones, a graveyard of the elephant. b) There is also a scene where the 3 hyenas try to chase down the young and helpless Simba right after his father death in the gorge. They got him deep inside the gorges, then into a cave and the chasing only stop when Simba managed to get through the thorn bush but not the hyenas .That is how the movie show the willingness to kill and consume young, sick or small animals of the hyenas (Simba) c) Finally, a scene showing the willingness to kill larger weakened animals in a pack is in the movie as well. It is when Scar has just been rejected from the Pride Rock and kicked away by the grown-up Simba. ...read more.

That is how the current ecosystem is replaced but burning, recycled by the next generation and a new ecosystem is put up with the old herbivores, carnivores but whole new producer partially (wildfire cannot burn everything in its way. 18. Removing several factors away from the ecosystem will surely result in an unbalanced ecosystem. For example: the herbivores. The predators will then have no food for them and their hunger will go on and on as long as there are no herbivores to hunt. The longer the period goes, the larger the number of predators is going to decrease. Although they can feast on dead bodies, other carnivores and some omnivores, that will take a long period time for them to get accustomed to it and during that time period, the population of the infants will be affected in such a way that the infants survival rate will be lowered due to their weak and immature features. The smaller the number of infants, the smaller the lion's population for the older ones will die of starvation sooner or later. Similarly, other omnivores will suffer from those diseases that infected the plants they consume and their population will decrease as well but not as heavily as the lion population for the lion's population is directly devastated.For the producer, they will over grow and diseases among plants will run rampant in order to prevent the sharp increase in Flora. The fact that the Flora is over grown is caused by the absence of herbivores to consume them and reduce the Flora species and individual plants. ...read more.